Who says spinning rust is finished?

Who says spinning rust is finished? Seagate has rolled out 8TB triplets and a 2TB mobile nipper, using shingled recording on its 8TB Kinetic.

The three 8TB disks use ninth generation perpendicular magnetic recording, and represent a 33.3 per cent capacity uplift on the existing 6TB technology that Seagate uses in its 3.5-inch disk drives. There is an 8TB enterprise capacity drive, one for network-attached storage (NAS), and a Kinetic Ethernet-addressed, key:value store drive.

Overview table of Seagate's 8TB HDD trio. Note on MiBs and MBs below*

We'll note that HGST has an existing 8TB drive, the He8, and also the shingled 10TB He10, each with 7 platters inside their low-friction helium-filled enclosure. Both Toshiba and Western Digital's (WD's) 3.5-inch drive product ranges top out at 6TB. (Actually WD has a 6.3TB Ae archive drive, but what's 0.3TB between friends.)

The 8TB Kinetic drive, a direct-addressed, object-storing drive, comes in 4TB or 8TB versions. It spins at a relatively slow 5,900rpm and the 8TB model uses shingled magnetic recording. Shingling involves overlapping the wider writing tracks but not the narrower read tracks to increase capacity. Blocks of tracks have to be re-written if any data in the block changes, which slows write speed compared to non-shingled drives.

Seagate is building a Kinetic OneStor 5U enclosure for November availability. It will have 84 drive bays and, filled with 8TB Kinetic drives, will provide 672TB per chassis, 5.3PB per rack. There is a data sheet for the existing OneStor AP-2584 here, which is based on using Seagate's 6TB drives.

The box is described as being a foundation for scale-out architectures, and has single or dual pluggable embedded server modules.

This is an open-source VM storage router for virtual machines, a software layer installed on a host or cluster of hosts on which virtual machines are running. A Google cached webpage states, "These VM storage routers (VSRs) operate like a grid leveraging local flash memory or SSDs and any storage back-end (S3 compatible object store, (distributed) filesystem, NAS) to provide an extremely high-performance and reliable storage system as compared to buying expensive SANs or NAS for VM storage." 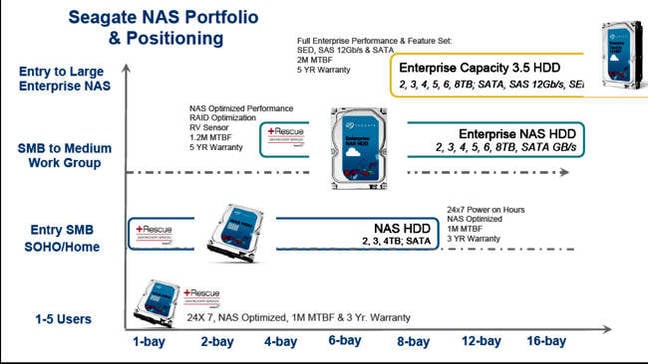 The Enterprise Capacity drive comes in a single 8TB capacity point with either 12Gbit/s SAS or SATA interfaces. Seagate's previous product topped out at 6TB and used, we understand, 6 x 1TB platters with a 633Gbit/in2 areal density. Its sustained data rate was up to 226MB/sec, whereas the new drive reaches up to 237MB/sec, helped by having a 256MB cache instead of the 128MB used previously.

Seagate says the new drive has a 100 per cent random write performance improvement over the last generation, helped by better caching.

The prior drive featured a 1.4-million-hour MTBF rating. The new one has been uprated to 2 million hours, so it's both fatter and faster and more reliable. The workload rating is 550TB/year with 24x7 operation. 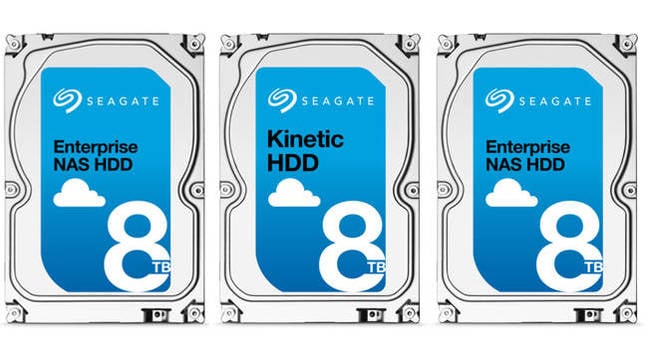 Seagate has also revealed 2TB, 2-platter mobile drive technology. Previously it used 500GB platters, but now it has doubled that. The drive is 7mm thick and Seagate says it's 3.17 oz in weight. It is 25 per cent lighter than Seagate's previous generation with Seagate saying it combines "new mechanical firmware architectures, with state-of-the-art heads, media and electronic design."

We can expect this to be used in Seagate small PC and notebook branded drive products. It might, we suppose, bring out a thinner still, 1-platter, 1TB version if there is OEM demand for it. The company says it's evaluating a hybrid flash/disk version of this drive with a NAND cache to provide faster data access speeds.

The company isn't saying anything about spin speeds. We reckon 7,200rpm is a certainty but 10,000rpm a little less so.

The company thinks that helium-filled drives cost more to make than air-filled drives and it won't suffer profit and revenue-wise through not having them in its portfolio this year. We think that its engineers are working on Seagate's own helium-filling technology though, as this enables high capacity through adding a platter and the disk drive future is a capacity-focused one.

It must be a racing certainty that WD will use HGST's helium-drive technology once China's MOFCOM gives the go-ahead to its operational merger with HGST. ®