If VMware is a sun, here are the storage worlds we've spotted orbiting it

The force is strong in this one, Darth

VMworld 2015 Behold the storage sun king – VMware is the center of a storage solar system with planets and asteroids orbiting around it in belts: the EVO, VSAN, and VVOL orbital zones. Fresh activity has been detected by telescopes on planet Register using its snark-o-scope.

In the VSAN zone we find Nexenta doing a deal with VMware whereby any validated VMware Virtual SAN customer can receive NexentaConnect to get file services – NFS and SMB access – layered on top of VSAN. The offer starts this month and includes unlimited raw storage capacity to match VSAN licenses, plus Nexenta technical support for 12 months.

Gaetan Castelein, a senior product management director at VMware, gave out a quote to make Nexenta swoon. "We are thrilled to select Nexenta as our file services component of VMware Virtual SAN."

Incidentally, Wipro said it is using NexentaStor to provide a VDI storage infrastructure for its VMware Horizon rollout with 4,000 users involved. It's going to use NexentaStor for its internal VDI as well as offering it to its customers.

In the VVOL area we have action from Atlantis, EMC, HDS (Hitachi Data Systems), and Primary Data.

The company is busy in the hyper-converged system area too. It's having its HyperScale CX-12 and CX-24 all-flash appliances factory-integrated and shipped directly to customers by server vendors or their distributors. These appliances have a choice of Cisco, HP, Lenovo, or SuperMicro server hardware. The HP deal (single SKU) is world-wide and the Cisco one is expected to go that way too.

With software storage products like this, you get the impression someone's spinning dogs around by holding their tails; but you don't know if it's SW humans spinning HW dogs, or HW people spinning SW canines. Who's in control here? It's all very confusing. 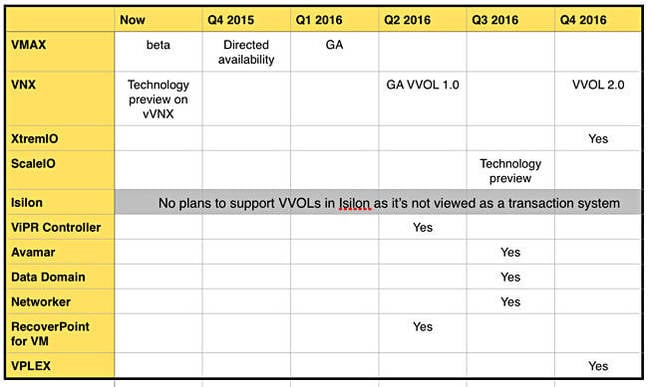 It says "DataSphere delivers a breakthrough solution that will allow existing storage to be VMware VASA-compliant." That means server-side flash, shared and cloud storage supported by DataSphere, whether or not these products have native VVOL support.

The EVO zone has seen new stuff too, with Dell and HDS activity.

Dell's EVO SDDC has been announced, the rack version of EVO:RAIL, a hyper-converged SW-defined data center (SDDC) offering. It should be generally available in the first half of 2016.

It has also upgraded its EVO:RAIL Horizon edition so that it provides more than 80 per cent greater density for virtual desktop and application workloads compared to the previous version. That's quite a jump.

That's done via a plugin to vRealize Orchestrator and vRealize Automation.

Dell is also reviewing its Dell Hybrid Cloud Platform Reference Architecture with VMware vRealize. It's designed "to help customers speed the design and deployment of a scalable and highly available VMware private or hybrid cloud solution."

HDS has a Unified Compute Platform (UCP) 1000 for EVO:RAIL. It optionally integrates with Hitachi's Data Ingestor software so UCP 1000 data can be siphoned off to a Hitachi Content Platform (HCP) system on-premises or to the cloud with Hitachi Cloud Service for Content Archiving.

What's clear at VMworld is just how massive an effect VMware is having on the storage industry. Should we consider that containerization will have a similar dynamic impact on our industry?

For example, VMware has created VVOLs; will we see CVOLs, Container Virtual Volumes? With containers being more open than VMware, will any such CVOLs be an industry-standard? Will OpenStack have a play here?

Our storage industry is changing so fast and in such unexpected ways. Incidentally, as a closing remark in the "I never knew that" category, I hear that EMC's ViPR is implemented with Docker and uses containers – that's why it scales so well. Amazing technology. ®