NSFW Google's turned on speech recognition for Google Docs users, but only if you're polite.

That's the conclusion of blogger Gretchen McCulloch, who writes about swearing at Strong Language (while the blog is probably NSFW, it's got some gems, such as a thorough trawl of Australia's Hansard to record “unparliamentary language” through the ages).

McCulloch decided to give the Google Docs speech recognition a whirl, and it was good enough to recognise “both pronunciations of “gif” and “aunt” in the contexts “animated ___” and “uncle and ___”.

Being the point of the blog, the next thing McCulloch tried was swearing at Google Docs, and that's when its puritan streak showed through:

“But then I tried swearwords and hit the f**king jackpot,” she writes. “Here’s a screenshot of what I got:” 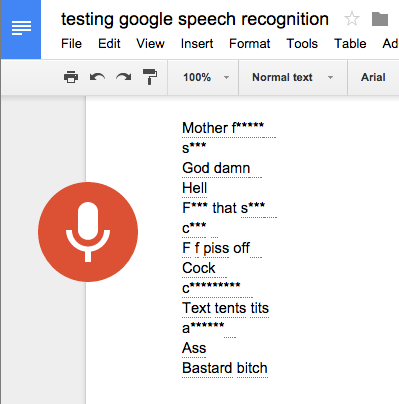 Oi, you! Wash your mouth out with soap!

“God damn, hell, bastard, and bitch aren’t bleeped — well, they’re on the tamer side. Tits and piss aren’t bleeped either, but it took several tries to convince the voice transcriber that I actually wanted to say them," she writes.

Of course, old hands will know that the Chocolate F**king Factory is bl**dy prudish when it hears naughty words.

Docs, it seems, is using the same back-end that converts voice to text for Android SMSs and in Hangouts, and takes exception to swearing in Google Translate.

Purely in the spirit of research, Southern Vulture Darren Pauli provided this Hangout speech message addressed at yours truly:

And after the Great Google Gay Translation Fail of January 2015, Mountain View's decided that as far as Docs is concerned, "faggot" is f***** and "poof" cannot be transcribed as anything but "push" or "put" (at least in this writer's Australian accent).

As far as we could tell, there is no preference setting that lets swear words through, but we may be wrong. What the **** do we know, you *****.®