Another month, another series of gains by NoSQL databases on their relational database peers.

In fact, according to the September data from DB-Engines, we’re not far away from seeing a NoSQL database crack the top three databases globally. So, for those who “can’t wait for NoSQL to die,” they’re going to be waiting a long, long time.

Not everyone agrees. For example, Milo co-founder and former Googler Ted Dziuba argues that NoSQL “will eventually get marginalised”, because it doesn’t solve problems that real companies have. Or, rather, NoSQL databases don’t deliver on promises that RDBMS mainstays like MySQL or Postgres do.

Because... well, because no one has the scale issues that Big Data creates, he writes.

Developing the app for Google-sized scale is a waste of your time, plus, there is no way you will get it right. Absolutely none. It's not that you're not smart enough, it's that you do not have the experience to know what problems you will see at scale.

While Dzuiba’s strawman is easily swatted aside (most companies really don’t have Google-scale issues), the NoSQL numbers indicate that companies do have Big Data problems they’re trying to solve.

But “Big” data generally has little to do with data volumes, as database expert Michael Franklin points out:

What's really fundamentally different about this new-generation data management isn't just scalability, but it's really flexibility. If you look at the ability to store data first and then impose structure on it later – sometimes this is called schema on read or schema on need – that's a complete game-changer.

“A complete game-changer” which may explain why enterprises are actively recruiting NoSQL talent.

Hence, as Big Data has grown, relational databases have stumbled as big data-friendly NoSQL databases have soared. This isn’t to suggest that companies are dumping their RDBMSes wholesale. Not at all. Rather, they are increasingly looking to NoSQL for new workloads.

And while it’s easy to look at that nearly 800-point delta between SQL Server and MongoDB and assume it’s an insurmountable one, we may not be far off from seeing MongoDB – the firm I used to work for – surpass it. Just look at the respective growth trajectories for the different databases: 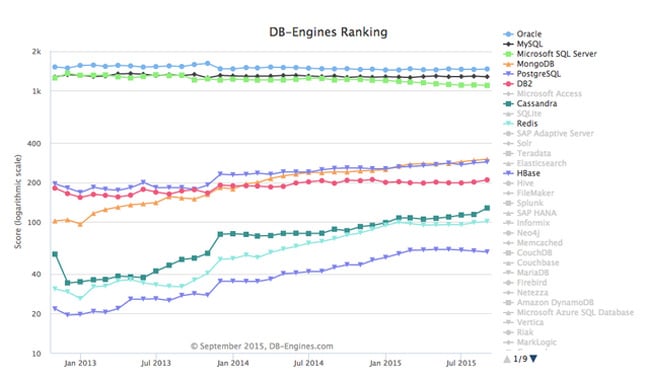 The one RDBMS that has hit a second wind and is growing well is Postgres. All others are flat or declining relative to their NoSQL peers. Turn this ship around, as Franklin intimates – this isn’t going to change anytime soon. We’re simply not going back to rigid structure for data.

Even areas that were previously off-limits for NoSQL are now available. Take, for example, IBM’s support for MongoDB on its z Systems mainframe. I have no inside knowledge on this, but I doubt many companies plan to run MongoDB on IBM’s outdated infrastructure. But the fact that IBM wants to provide for that unlikely chance... that’s interesting.

This is a winning combination in a world that is no longer run off neat-and-tidy spreadsheet-friendly data. This doesn’t mean Oracle’s Larry Ellison will be pawning his yacht anytime soon, but it may mean he’ll need to buy his way into NoSQL just as he bought his way into open-source RDBMS. ®