Photoshop for 40 quid: Affinity Photo pushes pixels further than most

Even creative pros are curious to try Serif's image editor

Review When El Reg tested the leading alternatives to Photoshop we told you to keep an eye out for Affinity Photo, a Mac-only rival from Serif that looked like being the best yet. It’s now out of beta and available for £40, which would buy you a Photoshop subscription for less than five months. 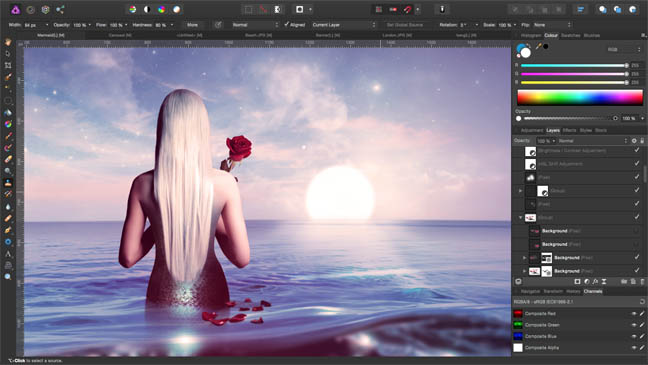 This is an app for serious image manipulation and compositing, not just tweaking. Click for a larger image

Still, you could get an image editing app for even less, and Apple already gives you one free – helpfully called Photos, just to make it impossible to Google any information about it. It’s just about capable of displaying and tagging your collection of pictures and making basic non-destructive tweaks, and it looks pretty, but Photoshop it ain’t.

And Affinity Photo? Well, I’ve been tweaking pics and reviewing image editing apps for two decades, and this is the first one I can remember that I might actually want to use.

All I really want to do

The user interface looks like a proper photo editing app, as opposed to the new kind where there are five icons that you click to get five sliders and that’s it. Everything is dark grey, of course, with a bunch of palettes docked neatly on the right. Down the left are the tools a Photoshop user would expect – and in 2015, that’s more radical than it sounds.

Today’s trend in image editing apps, especially on the Mac, is stripped-back, pared-down, task-focused. Want adjustments and filters? Pixelmator puts them at your fingertips. Designing apps or web graphics? Sketch has your core tools covered. Trying to prepare, composite and polish commercial photos or digital art? Sure, you can ... well, it almost ... umm, try Adobe, it has an app for that.

The trouble with ‘good enough’ image editing tools is that they aren’t. It’s no use just being able to select an area, for example; you need automated assistance to follow the edges of features accurately, and manual controls to adjust the results. Then, when you’re combining your cutout elements in layers, you need a full range of blending, masking and grouping options. Otherwise you’re probably just messing about.

Naturally, this £40 app doesn’t attempt to match all of Photoshop’s features – which extend into areas such as animation and 3D printing – but it does aim to provide a complete environment for image manipulation.