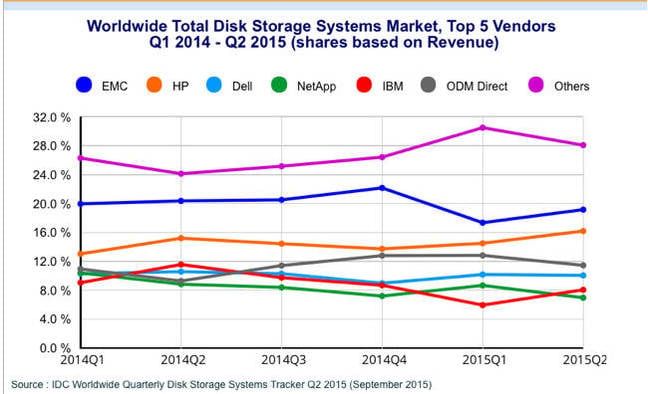 The research house tracks vendor and original design manufacturer (ODM) storage market shares based on revenue and it publishes a quarterly report, including a chart (above), showing how vendor shares have changed.

Looking at external disk storage IDC says: “EMC was the largest external storage systems supplier during the quarter with 29.9 per cent of worldwide revenues. IBM, NetApp, and HP finished the quarter in a statistical tie* for the second largest ranking with revenue shares of 11.1 per cent , 10.9 per cent and 10.5 per cent , respectively. Dell and Hitachi were also a statistical tie [in 5th place] with the two companies earning 6.6 per cent and 6.5 per cent of worldwide external storage revenues during the quarter.”

* IDC defines a statistical tie when there is less than one per cent difference in the revenue share of two or more vendors.