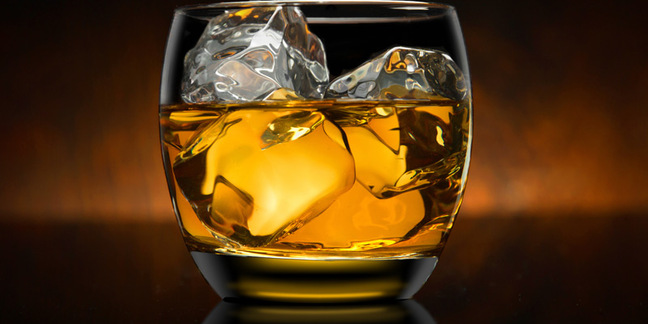 That's the verdict of Dr Bill Lumsden, director of distilling and whisky creation at Ardbeg Distillery, which sent vials of its pre-maturation Ardbeg new spirit distillate aloft in 2011 to determine "the effect of micro-gravity on the behaviour of terpenes, the building blocks of flavour for whisky spirits as well as for many other foods and wines".

The experiment, organised by US space research outfit NanoRacks, involved mixing 6ml of the distillate ("the liquid resulting from distillation, which is normally filled into oak barrels for maturation") with "oak wood shavings from the inside of a charred American White Oak ex-Bourbon barrel".

The upshot of this, as revealed in Lumsden's paper The impact of micro-gravity on the release of oak extractives into spirit (PDF) is "no significant difference" in values of "major volatile congeners", such as alcohols, aldehydes, ketones and esters.

However, "significant variable between the ISS and Earth samples was discovered when the results of the HPLC analysis of key maturation related congeners (wood extractives) were considered."

"The absolute concentration of these compounds was far higher than would normally be expected in standard, barrel-matured spirit, almost certainly as a result of the much higher surface area of woody material that the spirit was exposed to," the paper explains.

That's all well and good, but what of the "organoleptic assessment" involving the human nose and palate?

Well, here's how the space and ground samples measured up, according to Ardbeg's tasting notes:

Its intense aroma had hints of antiseptic smoke, rubber and smoked fish, along with a curious, perfumed note, like violet or cassis, and powerful woody tones, leading to a meaty aroma.

The taste was very focused, with smoked fruits such as prunes, raisins, sugared plums and cherries, earthy peat smoke, peppermint, aniseed, cinnamon and smoked bacon or hickory-smoked ham. The aftertaste is intense and long, with hints of wood, antiseptic lozenges and rubbery smoke.

The sample had a woody aroma, reminiscent of an aged Ardbeg style, with hints of cedar, sweet smoke and aged balsamic vinegar, as well as raisins, treacle toffee, vanilla and burnt oranges.

On the palate, its woody, balsamic flavours shone through, along with a distant fruitiness, some charcoal and antiseptic notes, leading to a long, lingering aftertaste, with flavours of gentle smoke, tar and creamy fudge.

Lumsden told the BBC: "When I nosed and tasted the space samples, it became clear that much more of Ardbeg's smoky, phenolic character shone through – to reveal a different set of smoky flavours which I have not encountered here on earth before. Ardbeg already has a complex character, but the results of our experiment show that there is potentially even more complexity that we can uncover, to reveal a different side to the whisky."

In case you're wondering just how this groundbreaking research will help advance humanity as it reaches for the stars, NanoRacks head honcho Jeffrey Manber said that his company's space booze alliance with Ardbeg "augurs well for the future of commercial space research into flavourings and what it changes for consumer products in general."

Ardbeg concluded: "The difference in simulated maturation conditions has resulted in a dramatically different flavour profile, which will give rise to the potential development of new flavours, and in particular new Ardbeg whisky expressions.

"The difference in flavour between the ISS and control samples is so marked, that further analysis will be carried out to elucidate the creation of the different flavours." ®