For years, archaeologists and tourists in Britain have stood enthralled by the great stone circle at Stonehenge, a relic of a lost culture about which we know very little.

Now researchers say that Stonehenge was once dwarfed by a nearby, much bigger rock-hard erection.

In order to make this discovery with as little disruption as possible, archaeologists used geophysical prospection and remote sensing technologies (nothing to do with CIA mindscan notions) to detect the stones.

The hidden erection-complex – thought to have been built around 4,500 years ago – was found in 2014 after digital maps were created as part of a scheme called the Stonehenge Hidden Landscapes Project, which was conducted by the University of Birmingham and the Ludwig Boltzmann Institute for Archaeological Prospection and Virtual Archaeology.

Some of the pillars would originally have towered up to 4.5 metres in height, looming over what is understood to have been one of the largest Neolithic settlements in Europe. They are currently laying on their side, buried beneath the banks of Durrington Walls. 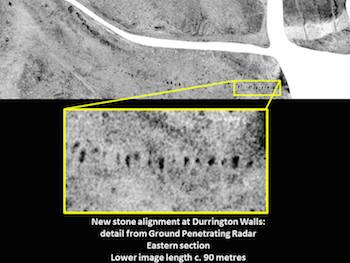 "This discovery of a major new stone monument, which has been preserved to a remarkable extent, has significant implications for our understanding of Stonehenge and its landscape setting," said Professor Christopher Gaffney, archaeological geophysicist at the University of Bradford.

"Not only does this new evidence demonstrate a completely unexpected phase of monumental architecture at one of the greatest ceremonial sites in prehistoric Europe, the new stone row could well be contemporary with the famous Stonehenge sarsen circle or even earlier," he added.

"Everything written previously about the Stonehenge landscape and the ancient monuments within it will need to be re-written." ®

Chance to hack Hellenic targets better than a bottle of Metaxa