On track, but no sign if the broadband project can hit top speed

Updated One of the big issues at Australia's 2013 election was the nation's National Broadband Network (NBN). Championed by the then-Labor government, the project was pitched as a nation-building effort to re-wire Australia with optical fibre, but cast as a failed black hole for cash by the then-opposition Liberal/National Party coalition.

The vision of NBN as a costly failure prevailed at the 2013 election, so two years ago today the coalition started to reform the NBN. With that milestone in mind, Vulture South decided to take a look at the government's performance.

As our guide, we've taken the coalition's pre-election policy document, which you can find here. In the main, we've skipped the opening rhetoric – the failures of Labor, the asserted disarray of the then-NBN Co, and so on – and stuck to specific commitments to see if they've been delivered.

Reviews: The government has delivered on the reviews and transparency changes it promised.

Not all of this is to be laughed at: there's no arguing that the reporting structure around nbnTM is vastly more transparent than it was under the previous government.

As the policy stated: “NBN Co will report to Parliament on rollout and end user take-up on a monthly basis. NBN Co will also make this data available each week on the NBN Co website.” That can be given a tick.

The NBN Strategic Review was delivered on time, in December 2013.

While it was criticised, that review did deliver the coalition's promised cost-benefit analysis of the NBN – but instead of being “within six months” of the government taking office, it took nearly a year.

Verdict: The coalition promised a flood of paper, and has delivered, and while some is of questionable value, the NBN reporting mechanisms are greatly improved.

Rural NBN rollout: There are some successes here. In particular, Vulture South has been told that the fixed wireless service is proving popular and is, by-and-large, delivering the performance users expect.

The other plank of the regional rollout, the NBN satellite service, has had a rougher ride: it was wildly popular, leading to a heavily over-subscribed interim service. However, the upcoming launch of Sky Muster will see subscribers move to the purpose-built NBN satellite.

However, it's worth remembering that the minister argued against the launch, even after the 2013 election. The now-defunct NewSkies satellite was his preferred option, as the policy states, with the promise that he would seek private operators for the service.

Verdict: Rural services are improving and will continue to do so, mostly because the government decided not to change policy on satellite services it once decried.

Timing: The Liberal Party's pre-election policy document stated ”Our aim is that everyone in the nation should have access to broadband with download data rates of between 25 and 100 megabits per second by 2016”.

That timeline was quickly exposed as optimistic and the "aim" unrealistic. The universal 25 Mbps service promise has now been pushed out to 2020.

Fibre-to-the-node (FTTN), however, has to be regarded as the greatest disappointment of the policy: the government has failed to deliver either the rapid rollout or the amount of savings promised in the policy.

“Approximately 65 per cent of the FTTN portion of the rollout is expected to be completed in the four years to 2016-17. The remaining 35 per cent will be deployed in 2017-18 and 2018-19 and will in most cases be in areas served by HFC networks”, the policy stated.

At the most recent nbnTM presentation, the company hopes to activate 1.8 million premises on FTTN by 2018. That's a little late. Also, absent a full footprint plan detailing which premises will receive which technology, it's impossible to say if the promise of 65 per cent FTTN completion is on track.

Infrastructure-based competition: This was a key plank of the then-opposition's policy. Instead of shutting down the hybrid fibre-coax (HFC) broadband services, the coalition's policy was to let them compete with the NBN to help “keep prices down”.

Instead, the HFC networks have been absorbed into the NBN. There are no NBN services on the HFC yet – that's currently slated for 2016.

Verdict: The promise of infrastructure-based competition was abandoned entirely.

Multi-dwelling units: The coalition policy promised that MDUs would be served by fibre-to-the-basement, and while it took a while to get going, nbnTM is delivering on this part of the promise.

However, the minister also anticipated that there would be private sector buy-in to help things along; instead, the NBN FTTB rollout has turned into a connection race with TPG that's reminiscent of the late 1990s, when Telstra and Optus followed each others' HFC rollouts.

Verdict: There have been stumbles, but allowing FTTB to service MDUs was a good idea.

New housing estates of any significant size were already designing-in fibre to make the homes attractive to buyers. Although these were often tied to a single provider, there was a flourishing business that the old NBN policy threatened to kill off.

The requirement that network owners in greenfields estates be made available as wholesale services took form in the minister's 2014 announcement, that all carriers building “superfast access networks” offer non-discriminatory wholesale access.

However, the coalition's original greenfields policy had several other planks:

Verdict: Almost none of the original greenfields policy remains in place.

Cost: By far the worst performance is in the matter of the cost of the NBN.

The pre-election assertion that the FTTP network would cost AU$90 billion was quickly revised down to $73 billion, which is still a lot of money, but at the same time, Turnbull's statements about the cost of the multi-technology model have repeatedly been revised upwards.

The $20.4 billion capex, and peak funding of $29.5 billion, were obsolete within a year, and after several revisions, the most recent estimates for the NBN build are peak funding of between $46 billion and $53 billion.

The government protected its own books by the simple expedient of capping its investment. To meet the balance, nbnTM will have to raise its own debt.

Verdict: The government has performed no better than its predecessor in making cost forecasts.

Some of that criticism has been fair, some partisan. None has admitted that the government's own pre-election policies may have over-promised or been overly-optimistic.

It's clear now that was the case: promising universal 25Mbps services by 2016 was rash. With four months to go, it's entirely likely 2016 will roll around with not a single commercial FTTN connection in place and little sign that nbnTM is any more likely to deliver them at a rate of tens of thousands a week than was the case under previous management.

The NBN may no longer appear to be a chaotic operation: in two years it appears to have stabilised. Evidence it's now ready to do the job as promised is now awaited eagerly. ®

Update: The government's view of its NBN achievements is, unsurprisingly, at odds with Vulture South's. In this self-congratulatory summary of its two years, the coalition reckons only its management of the NBN has led to growth in the number of connections. 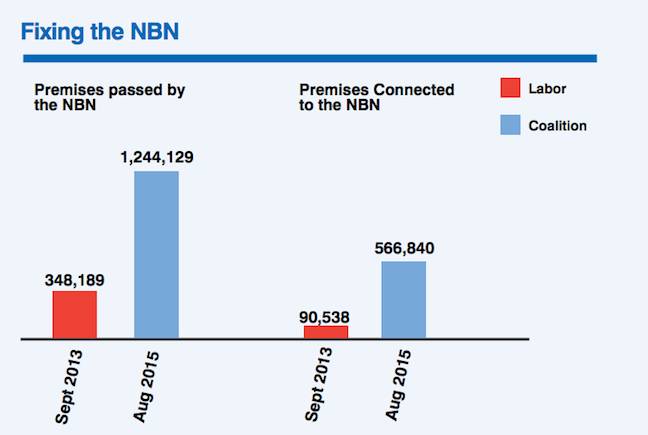 It also spun nbnTM's need to employ more staff to cope with adding the FTTN rollout as a win.

Aren't you glad that's been cleared up? ®