Sysadmins, get ready to manage servers on ANTENNA POLES

It's increasingly clear to the telecommunications industry that content distribution is going to need to push further out into networks, to try and relieve congestion on the moderately-constrained backhaul that connects cell towers.

Content caching at base stations can help, but as an IEEE Fellow from Hong Kong University of Technology Xi Ping points out in a new paper, the caching strategies that have served us well in fixed networks (cache the most popular content in the ISP network, for example) are challenged by cellular network backhaul and unreliable radio links.

It's also worth pointing out that optimising the base station cache strategy is also important since with tens of thousands of base stations in service, the wrong deployment would be a very expensive mistake.

The basis of Ping's proposal is that in the mobile network, cache design needs to take in user delay (averaged across many users), the caching constraints at each base station, and the propagation delay on base station backhaul links, and the interplay of content popularity and the backhaul network.

If you ignore the complexity of the mathematics involved, one either-or decision behind the strategy is pretty simple:

As the paper states, a caching strategy is limited by whatever resources are available at individual base stations, since a small cache is going to need more frequent refreshes.

The optimal caching strategy demands “knowledge of channel statistics and file popularity”, so that their proposed central controller can make sure local caches are filled with the right stuff.

There's another problem which, they note, is specific to mobile networks: the relative unreliability of the wireless link between base station and user.

While vendors like Dell have discussed cache deployment in networks such as Australia's NBN, the designer can assume reasonably well-known transmission characteristics between the node and the user.

On a cellular network, however, there's a bunch of things that can degrade the user's connection: other users' activity on the same base station, interference, signal fading as a user moves around, and so on.

To get around this, Peng et al note that if the same content is cached at multiple base stations, the system can identify a user with a failing channel, and redirect the download to a nearby cache that's offering a better signal. 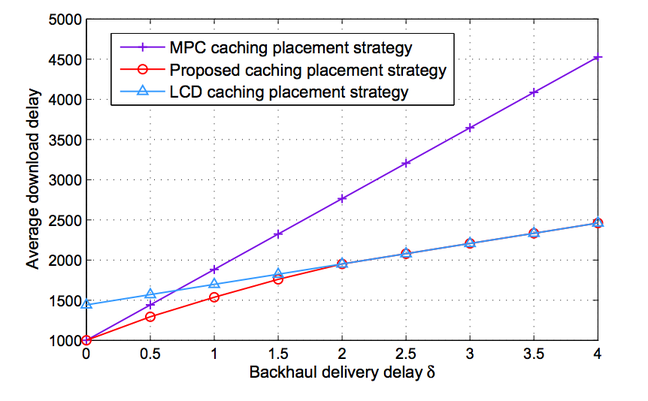 Want faster mobile downloads? Cache at the intersection of the lines

As the authors' simulated test suggests, their model offers the best of both worlds: where there's low backhaul delay, the system matches traditional most popular content (MPC) strategies, while if the backhaul link is suffering, it converges to the largest content diversity (LCD) strategy. ®