'A word processor so simple my PA could use it': Joyce turns 30

A connection is made

The PCW didn’t have much in the way of external connectivity – no Centronics, IEE488 or RS232, which were the ports of the era – so had no networking or internet access. Instead, there was an edge connector, to which the serial interfaces were attached. A few of these were hand-built for use in development.

Lead developer Cliff Lawson was once in the middle of using one of these when Bob Watkins, who was effectively the CTO (although no-one used titles much, and certainly not American-sounding ones) asked to borrow it. Cliff acquiesced, saying he’d need it back in half an hour. By the next morning it was in Hong Kong being turned into a product. 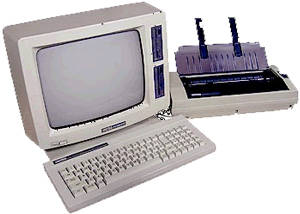 The development of CP/M also reflected Locomotive’s history. Chris Hall and Richard Clayton had worked on Z80 BBC BASIC for the Acorn Tube second processor for the BBC Micro, and this became Mallard BASIC for the PCW. It opened up a programming route for the machine, as did the publication of technical manuals for developers. While it was not really a games machine, quite a lot of Spectrum hits were ported, such as Spindizzy, Head over Heels and the library from Ultimate Play the Game.

Most of all, the long lasting effect of the Joyce was to get people writing. If everyone back then had a book in them, it was often the PCW8256 which got it out. Significant businesses can trace their roots back to early work on the machine. Many writers got their first books published after typing it out on a Joyce and millions of parishioners were bored silly, as vicars started writing full sermons, rather than a few quick notes.

The follow-ups were not as successful: the PCW16 – codenamed "Anne", because it was "a home office" and the Home Office is in St Anne's Gate – may have continued the naming tradition, but it didn't change the world.

Joyce Caley died in June 2014, but the legacy of the machine she inspired lives on. ®

Please Enable JavaScript to use this feature.
Page:

Why go through the hassle of demands and decryption when quietly mining is so much easier?
Cyber-crime6 Jul 2022 |