Take it in house

Doing it yourself, is regarded by many as far too techie, and not worth the trouble, wading through all the spam. But actually, it can be a lot easier than you think, and that's what I'm going to look at over the next couple of weeks.

Setting up your own email system can have various advantages. For some people, it's the security. After all, if it's your mail server the government wants access to, they're going to have to ask you. They can't serve your ISP with a warrant that forbids them from letting you know. My own reasons are rather simpler, as I keep just about all of my emails – beyond spam and system notifications. So, I can find the commission for an article I wrote in 2001, or the receipt for a gadget I bought online years back.

If someone says an article isn't quite what they wanted, or I quoted them out of context, I probably still have the messages that will cover my arse. And they're all sitting organised in IMAP folders in my office, so finding what I want is very fast. Yes, there's a lot of junk mail that gets filtered out – but I'm in control of that too. I can easily access all those messages on any of my devices, securely, and I can make sure they're backed up regularly, too, somewhere that I trust. 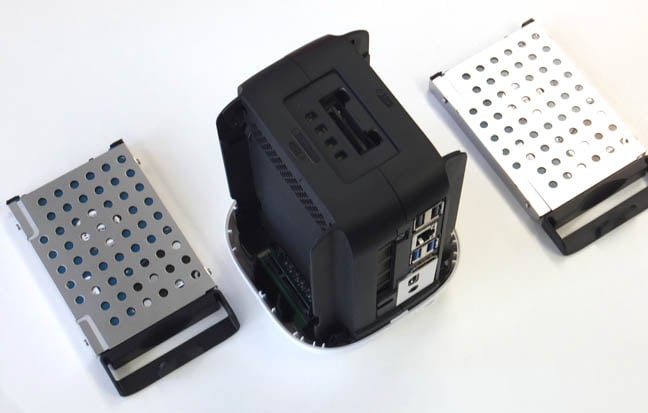 None of this requires massive amounts of hardware either. A little while back, I looked at Acer's Revo One RL85 compact system, and while the top end model is a bit pricey, the low end Celeron comes in at £199. Even better, with a couple of tweaks to the bios, it's possible to boot and install other operating systems. Next weekend, I'm going to look in detail at how I set it up to be my new mail server, but first, I'm going to explain what that system's made up of.

As I mentioned in the review of the Revo One, the operating system I got it to boot was OpenBSD 5.7. One of the reasons for that is familiarity. I've actually been using it to run mail servers for several years, and the reasons are just as good as they were back then.

In particular, by default, OpenBSD runs very little more than ssh, in terms of internet services. You can be pretty sure that the only things that are going to be exposed to the rest of the world are the ones you choose.

It has a fairly small footprint too. For a long while, I ran an earlier version of OpenBSD on a system with a 1GHz Via C7 processor and just 2GB of memory. That died of old age this summer, just as the Acer Revo One came along, so it seemed a sensible time to rebuild my mail server, with new versions of software, and do a how-to at the same time.

OpenBSD makes a solid foundation for setting up your email server

So, on top of OpenBSD, I need some other elements: a Mail Transfer Agent (MTA) to accept messages from the internet, and route them as appropriate to mailboxes or other accounts elsewhere; a message store, and a server to access the messages it contains; a filter to get rid of the junk email, viruses and blacklist jilted lovers.

That's one way of making people check for updates