What should we do with this chunk of dead air? Ofcom wants to know

VHF isn’t just for voice. Ofcom is seeking advice on how to get things connected in the spectrum space between 30MHz and 300MHz. The regulator argues that lots of spectrum is underused, or not used for the most productive things.

In its consultation (PDF), Ofcom says:

This document aims to encourage investment and innovation in the Internet of Things (IoT) using 10.1MHz of spectrum within the 55-68MHz, 70.5-71.5MHz, and 80.0-81.5MHz bands by using our existing licence products.

At the frequencies and powers Ofcom is discussing, we are looking at long range, low bandwidth applications: using wirelessly connected sensors for “smart” farming, where fertiliser and water are automatically distributed across a farm to increase efficiency; intelligent traffic management systems; and smart energy grids, which match power generated to consumers’ electricity needs.

Smart farming would see sensors sown into fields with grain to measure moisture at different depths below ground, or put into grain silos to monitor for temperature.

Intelligent traffic management systems look at putting a plaster on the British wound of not being prepared to invest in the road infrastructure, while smart energy tries to manage the inherent problem with the wind blowing and sun shining at times when people don’t want electricity – and people wanting electricity when it’s dark and still.

The frequencies Ofcom is consulting on are currently allocated to a service called Business Radio. Ofcom points out that there is nothing to stop people with licences for this from using it for data rather than voice.

There is some licensing in the spectrum area under consideration for Programme Making and Special Events, some of which has to be left clear for DVB-T (Freeview type services) by international agreement, even though we don’t use the space in the UK. As with most types of spectrum, the military has a bit of it too.

The document contains a diagram which shows how the spectrum might be used for M2M applications for remote and rural applications. It notes that the VHF spectrum could also be used for the sensors and not just for the link between LANs, but relatively large antenna sizes at VHF may not be practical for some sensor-to-sensor links. 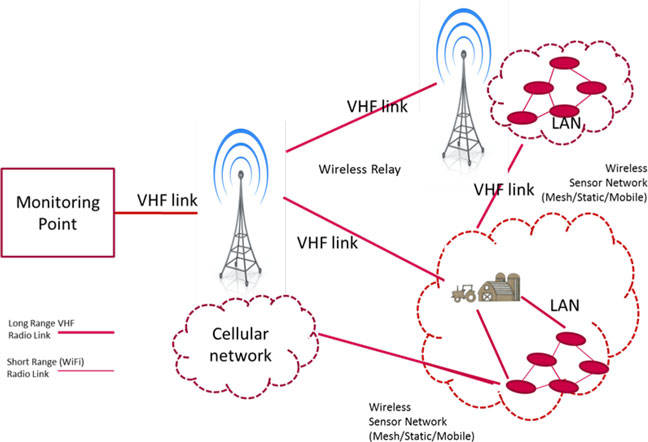 One issue the organisation has to wrestle with is the difference between making spectrum unlicensed, such as Wi-Fi, or licensed, such as TETRA. An unlicensed model reduces the paperwork for both users and Ofcom, but means there can be no guarantee of levels of service. For using the spectrum at higher powers, that’s not a good thing.

You could comment below but Ofcom would really appreciate it if you responded here. ®