Safe harbour’s takedown provisions mean that rights holders must play whackamole, as the black supply chain ensures the goods reappear in the shop window, usually the very next day. Rightsholders file millions of takedown notices with little effect. The BPI alone has filed 66 million with Google in the past year.

The clumsy YouTube deal with indies was never supposed to become public, but it simply made clear what everyone already knew: the platform held all the power, and takedowns were ineffective. But as one US legal expert told us, “limiting liability was never intended to be a shield for criminal behavior”.

Fixing the loophole doesn’t mean a drastic change in the law – or even any change at all. A code of conduct could ensure that where modern filtering technology is available, the platform should use it. Google has developed its ContentID music filtering technology to identify songs as they’re uploaded – but it refuses to turn it on.

So the EU Commission is asking whether a takedown notice should mean “stay down”. It’s also asking whether big platforms (which base their success on hosting other people’s stuff) should be treated differently to ISPs. Safe harbour and InfoSoc were largely written with ISPs in mind. The complaints today are with those who directly profit from the skewed terms of trade, such as Google, rather than ISPs.

Some ISPs, like BT, have spent billions on buying rights in the open (legal) market – so may have an opinion or two on platforms benefiting from piracy.

Plugging the legal loophole could mean that Silicon Valley’s VC priorities could change. A few years ago SoundCloud was a humble music widget, but VC cash saw it grow into a vastly popular unlicensed music site that depends on uploaders for its supply chain.

SoundCloud has stalled for years on signing a deal that pays songwriters and musicians for their music, and late last month, the Performing Rights Society (PRS) finally lost patience and sent in the lawyers.

Unable to assume that you can get huge from not paying your suppliers, VCs and other investors may think about investing differently. After all, if you operate a pub, you need to pay for the beer and staff.

Internet companies also need to pay for staff and premises – but they can get away with not paying for their music and video rights because of the liability loophole. And without video and music, who'd go there? 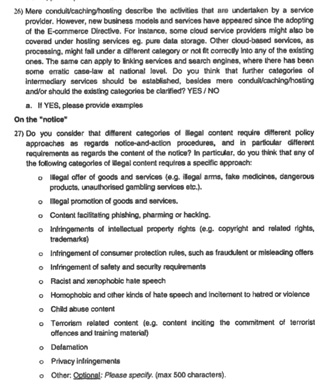 The consultation is officially expected later this month. The draft commission consultation stresses that nothing implies legislation is forthcoming – and in several areas asks if market dynamics and self-regulation are preferable to another Brussels edict.

If Take Down should mean Stay Down, expect to hear a great deal about how "the internet is being broken". ®