On top of 55,000 or so people already thrown out the door from troubled IT goliath

The troubled IT giant told analysts in San Jose, California, on Tuesday it will have to make the redundancies as part of an effort to trim $2.7bn from its books.

The axe will fall in Hewlett Packard Enterprise, which is one half of the HP split that formally concludes on November 1. The other half of the tech goliath – HP Inc – will flog printers, PCs, and so on. In mid-2015, the whole of HP employed 302,000 people.

According to HP Enterprise CFO Tim Stonesifer, the cuts will bring a $2.7bn GAAP charge with $2.6bn in cash payments to take place over the next three years. Once those charges have been absorbed, HP said it plans to save about $2.7bn annually from the reduced headcount, most of that coming from its Enterprise Services operation.

The cuts come on top of the 58,000 jobs HP shed as part of an earlier series of redundancies set to wrap up in late October. 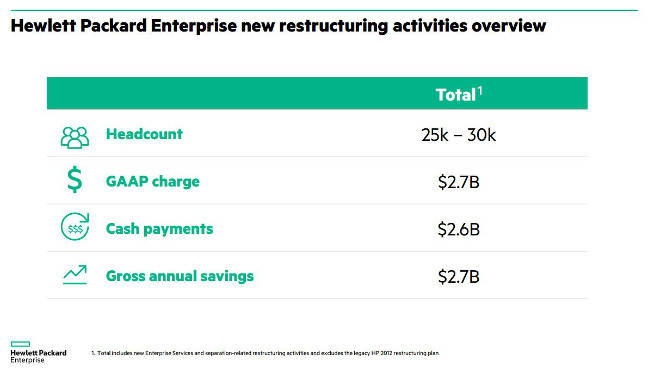 Analyst day slide ... HP Enterprise stands to shed as many as 30,000 employees

The redundancies had been expected from HP as the company holds its analyst day meetings. The key slides on the layoffs are here [PDF] – specifically slide 10. It's suggested the cuts were made after the biz's stock buyback scheme went south in the second and third quarters of this year.

"Hewlett Packard Enterprise will be smaller and more focused than HP is today, and we will have a broad and deep portfolio of businesses that will help enterprises transition to the new style of business," said HP enterprise CEO Meg Whitman.

"As a separate company, we are better positioned than ever to meet the evolving needs of our customers around the world."

Whitman added the latest mega redundancy programme was part of the “final actions”, which will “eliminate the need for any future corporate restructuring”.

She also likened the $4bn in annual revenue HP Enterprise Services has lost since 2011 to water draining from a bathtub. Her biz is also moving jobs to countries where pay levels are lower – by 2018 getting as many as 60 per cent of its workforce into nations where salaries are smaller.