Journos to be spared replacement by robots, BBC claims

Telephone salespeople certainly ready for their berths on the 'B' Ark, though

It's sighs of relief all round here at Vulture Central today as a handy BBC guide as to whether or not you're scheduled to be replaced at work by a robot reveals that journalists are at a mere eight per cent likelihood of automation*. 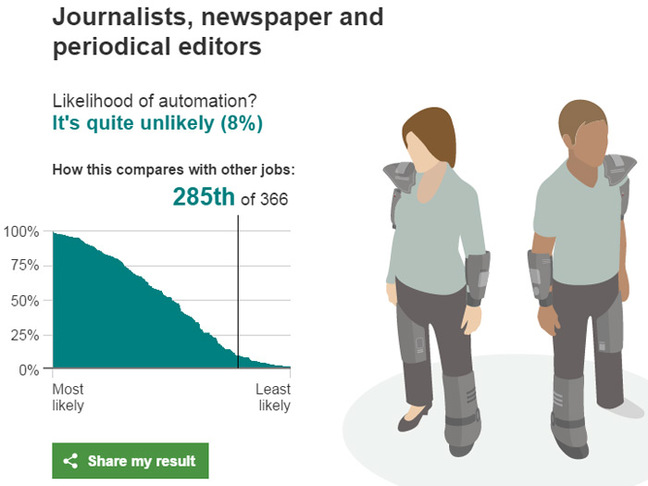 The chilling facts are these: Researchers** have calculated that "35 per cent of current jobs in the UK are at high risk of computerisation over the following 20 years". Mercifully, "journalists, newspaper and periodical editors" rank way down at 285th (of 366) on the at-risk register.

Similarly safe from the scrapheap are midwives and nurses (joint 354th spot), podiatrists (349th), and (good news for some of our readers) the "IT business analyst, architect and system designer", (353rd).

Fantastically, the "publican or manager of licensed premises" is the least likely to be evicted by a robot, sharing bottom of the list 365th position with hotel managers or owners.

On the other hand, if you're a "telephone salesperson", "typist or related keyboard worker", "legal secretary" or "financial accounts manager", then you'd better start training as a pub landlord right now, because those four jobs are top of the list for the chop.

Disappointingly, we weren't able to find "butler" on the Beeb's list of professions, so it's unclear whether we'll finally get the robolackies we were promised back in the 1950s. ®

* However, this high regard for the human qualities which make up an effective hack hasn't stopped some quisling organisations from trying to phase out fleshy news gatherers already.

** See The Future of Employment: How susceptible are jobs to automation (PDF), by Oxford Uni's Michael Osborne and Carl Frey.