Burn all the coal, oil – No danger of sea level rise this century from Antarctic ice melt

One of the world's most firmly global-warmist scientists says that even if humanity deliberately sets out to burn all the fossil fuels it can find, as fast as it can, there will be no troublesome sea level rise due to melting Antarctic ice this century.

Dr Ken Caldeira's credentials as a global warmist are impeccable. He is not a true green hardliner - he has signed a plea to his fellow greens to get over their objections to nuclear power, for instance, and he doesn't totally rule out geoengineering as a possible global-warming solution. But that's as far as he'll go: in Dr Caldeira's view, it is plain and simple unethical to release greenhouse gases into the air. There's no middle ground on that as far as he's concerned - he's not OK with gas power as an alternative to coal, for instance.

But he's a scientist, and like all proper scientists he's willing to admit inconvenient truths. In this case, the truth in question is his own prediction that no matter what humans do in the way of carbon emissions, sea levels are not going to rise by more than 8cm this century due to melting Antarctic ice. For context, the seas have been rising faster than that for thousands of years. They rose 17cm just during the 20th century, and the Antarctic cap is far and away the biggest body of ice on the planet.

That prediction comes as part of a new study just out by Caldeira and some of his climatologist colleagues, in which they take a look at what happens to the Antarctic ice if humanity burns varying amounts of the available fossil-fuel reserves thought to exist.

The headline on the accompanying press release is much more in line with what Dr Caldeira and his colleagues were seeking to show: "Burning all fossil energy would raise sea-level by more than 50 meters".

That certainly sounds pretty scary. But the fact is that the study starts with some pretty extreme assumptions - in particular, it assumes that no matter how much fossil fuel humanity decides to burn, it will burn it all very fast - in a "pulse" lasting no more than a few hundred years, with rates of emissions multiplying to many times their present level in the extreme scenario. This assumption is necessary, as CO2 disappears from the atmosphere over long periods, so the rapid burning is needed to force carbon levels up to scary values where properly scary things might happen.

But carbon emissions certainly are going up pretty fast, so it's not crazy of the scientists to make such assumptions. That's not the problem with the study.

The problem is that, yes, they might be right and all the Antarctic ice might well melt if all the coal and oil and shale and everything is burned as fast as we can burn it. But - according to their modelling - this increased melting will take at least a thousand years, probably more. And, crucially, it will not really get rolling at all until well after the year 2100.

You wouldn't learn this from the press release, and as a result you won't learn it from most media outlets. But it's there in the supplementary data, Figure S2: 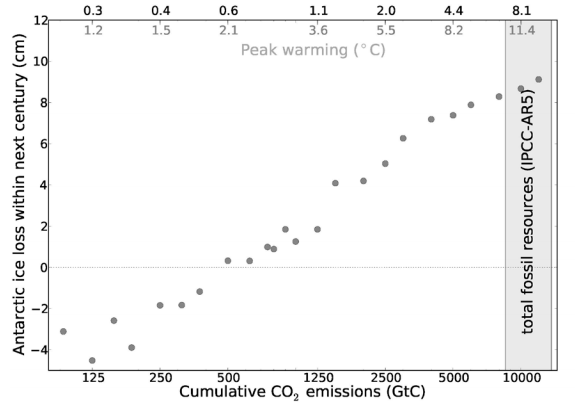 Burn it all, it doesn't matter to anyone alive today

Even if we're on the burn-it-all road, we're looking at a not-so-terrifying 8cm of sea level rise over the next 85 years. You, and your children, and your children's children, can pretty much relax. Your many-times-great grandchildren - assuming they haven't gone off and colonised Mars or something - may have had to move house. But America builds more than half a million new homes every year, enough to rehouse every American threatened by an entire metre of sea rise in just four years, and a metre isn't coming sooner than 2200AD according to Dr Caldeira and his colleagues. So that probably isn't something to fret over too much, especially as you would have to hope, on that kind of timescale, that some of them at least might be living in airborne houseboats or floating cities or something a bit futuristic, even if they haven't moved offworld.

On the timescale at which the study predicts actual major sea-level rise, people really had better have got cracking on the space travel and associated proper advanced technologies, or the risk of human civilisation being wiped out in some non-carbon-related disaster - asteroid strike or other cosmic event, for instance - becomes rather more disquieting than having to move house and get stronger air conditioning.

It's not what you'd call a massive spur to action on carbon, certainly. The new paper, published in the journal Science Advances, can be read here. ®