Ahmed's clock wasn't a bomb, but it blew up the 'net and Zuckerberg, Obama want to meet him

Teen's arrest goes viral, support pours in from the web

Pics Support is today pouring in for the nerdy Muslim teen who was cuffed by cops for bringing to school a harmless clock that apparently looked like a bomb seen in movies.

And as President Obama, Facebook's Mark Zuckerberg, and other big names, backed the smart lad, and thousands of people tweeted and blogged their support, his family were on their way to their lawyer for advice.

14-year-old Ahmed Mohamed was arrested on Monday in Irving, Texas, after his principal and police suspected a homemade digital clock he brought to class was intended to be a hoax bomb.

It's claimed he wasn't even allowed to talk to nor ask for his parents, as allowed by law for juveniles in the state, while cops grilled him. 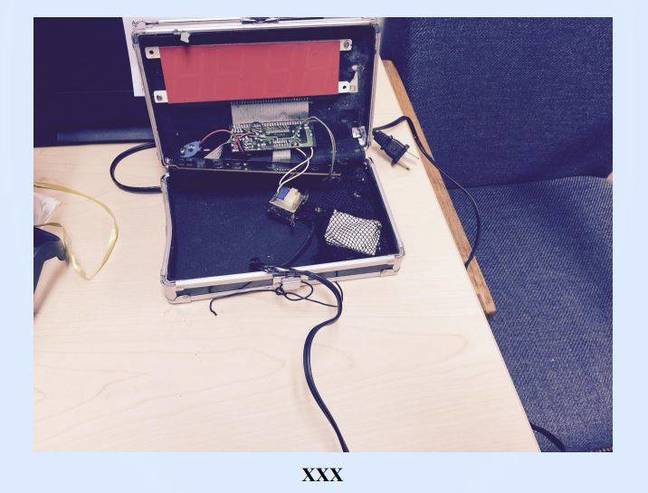 Mohamed, a freshman at MacArthur High School, said he brought the clock – a simple project housed in a pencil case – to show his engineering teacher. When the clock was seen by another teacher, school administrators and police were called in and the young man was eventually led away in handcuffs.

In a letter to parents, the school said it had called in police to investigate a "suspicious looking" item and that no safety threat had been found.

The case drew an almost immediate outcry across the worldwide web, with many accusing the school and police of treating Ahmed, whose father immigrated to the US from Sudan, with ethnic and religious prejudice.

"But because his name is Mohamed and because of September 11, I think my son got mistreated."

Going to meet my lawyer. pic.twitter.com/YCxOOeOz3Z

As word of the case went viral – trending on Twitter under the hashtag I stand with Ahmed – public figures, including President Obama, spoke out in support of the teen.

Cool clock, Ahmed. Want to bring it to the White House? We should inspire more kids like you to like science. It's what makes America great.

Next page: Zuckerborg invites Ahmed to the hive
Page: