Geek's Guide to Britain The Botanic Gardens, Sheldonian Theatre, Museum of Natural History – there’s plenty to see in Oxford. Off limits, however, was the New Bodleian Library, arguably the city’s greatest treasure and jewel in the nation's academic crown.

The Bodleian is home one of the world’s oldest and greatest collections of books, maps and documents dating from 1602. These include the largest number of books printed before 1500 held in a university library, manuscripts from medieval Europe and the Byzantine Empire, and one of the largest concentrations of modern British political manuscripts.

It is principal library in the Bodleian libraries system and these works were largely shielded from public view, with the Bodlean offering just a tiny exhibition space across the road where it's based on Broad Street.

That all changed in March, with the New Bodleian’s re-opening renamed as the Weston Library following a three-year, £80m transformation.

The building retains its distinctive, honey-coloured Deco-style exterior and the only obvious sign of change is a new glass front on the ground floor.

Go inside, though, and the extent of the change is laid out. The massive book store that occupied the centre of the building was removed above ground level. In came the atrium that now welcomes the public, free of charge.

It is finished in glass, steel and wood, a modernist church to learning finished with narrow, high windows. In, too, came 40km of storage facilities above and below ground that house works.

With the atrium is a café and gift shop – and two galleries, which will now house exhibitions based on at least some of the works that cemented the Bodleian’s reputation. The inaugural exhibition was Marks of Genius that ran until September 20 that could be subtitled Now That’s What I Call a Library, giving you – as it does – a peek at some of the Bodleian’s greatest treasures. A permanent, smaller exhibition of treasures will open in December 2015.

To get to the galleries, I enter through the new glass doors up steps from Broad Street. Before the refit this was a blank wall; now, anyone can stroll in via that atrium. There’s a glass-walled corridor of bookshelves above three of its sides, part of the working library for students and academics. Animated screens illustrate the library’s history. It’s very far from being dusty.

At the back of the atrium are the galleries, currently featuring many examples of genius that are beyond price. There are a few wry additions – such as Philip Larkin’s university careers service record card – demonstrating the difficulties of spotting genius at the time. 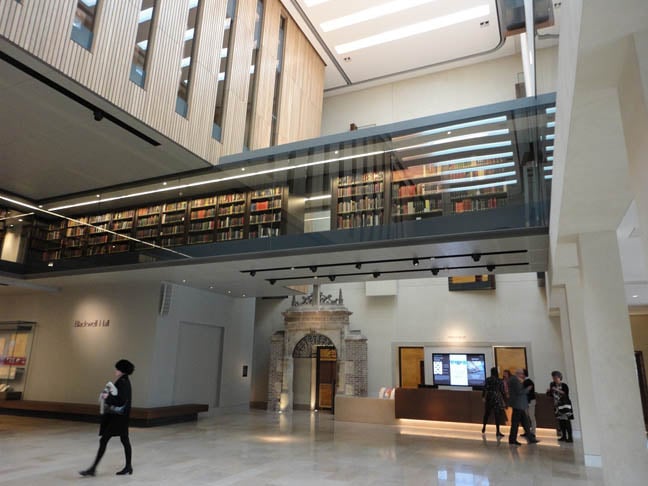 Larkin’s unflattering profile is in the smaller Treasury gallery, which also features a battered First Folio of Shakespeare’s plays, which the Bodleian bought, sold, then reacquired in the 20th century; an early copy of Sense and Sensibility by Jane Austen, in which someone has appended “More absolute trash was never written”; and handwritten manuscripts of The Wind in the Willows and Frankenstein. Kenneth Graeme has very neat handwriting. Mary Shelley, less so.

The larger ST Lee gallery includes JRR Tolkein’s own cover artwork for The Hobbit – green forest, blue mountains, dragon-ridden skies and a note telling the printer to ignore the pink sun as printing another colour would cost too much – and the script for prime minister Harold Macmillan’s 1960 ‘winds of change’ speech, condemning apartheid in South Africa, with the key words added in pencil to the typewritten draft.

There’s the astonishing Gough Map, a large, detailed reference of Great Britain showing 650 cities and towns, created in the 13th or 14th century for purposes unknown. This is a good place for cartophiliacs: the gallery also features a 1612 map of Virginia, and Ptolemy’s Geographia atlas printed in 1486. Out in the Blackwell Hall atrium hangs the Sheldon Tapestry Map, created in 1590: a beautiful wall-sized map of Worcestershire and surrounding counties.

The ST Lee gallery also features one of the Bodleian’s four copies of the Magna Carta, agreed by Bad King John 800 years ago and – essentially – the source code of liberty. Like much old code, it’s a pain to read (it’s in Latin) and most of it is obsolete (although the best bit is still part of English law). But there it is in front of you: one of the founding documents of freedom. 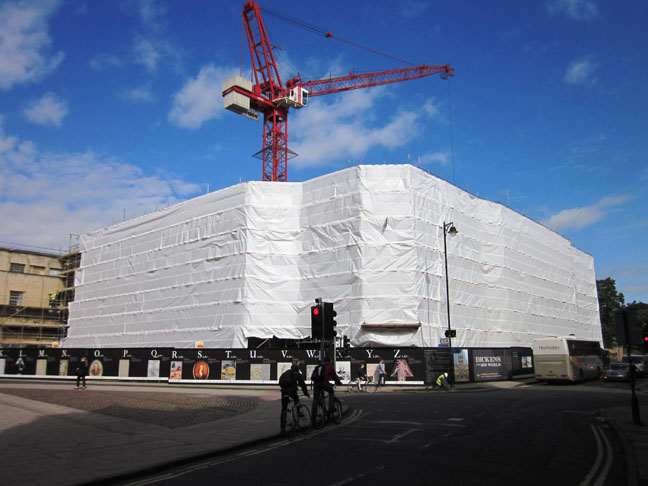 The New Bodleian underwraps during its transformation to the Weston. Photo: Toby Kirtley

It isn’t ancient documents that grant visitors the freedom to see all these treasures: it is modern technology. Until 2010, what is now the atrium of the building was out of bounds to all but a few staff, as a “closed stack” – an 11-floor warehouse holding some five million books, surrounded by reading rooms to which the books were delivered.