Your turn to write the jokes

We're on a roll with the caption competition and this week’s picture of a snake reading The Reg showed some great wit. Readers entered the vivarium for a chance to win a Western Digital Black, 6TB hard disk.

Regular competition entrant i steal your leccy offered This is not the python tutorial i wanted!, while Ol'Peculier:The Register is currently testing a Python script to stop people installing AdBlock had similar thoughts. 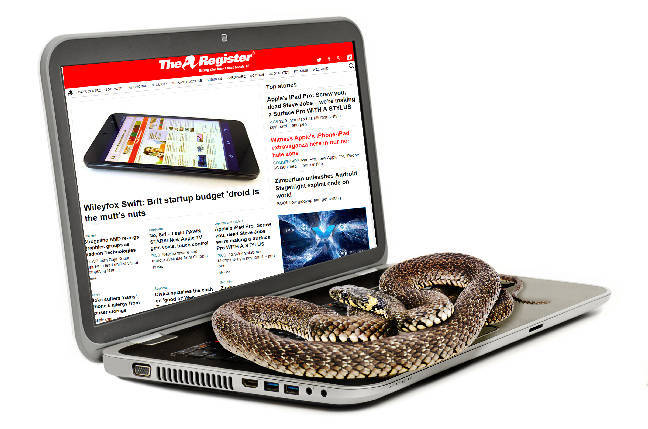 Peter Gathercole felt the pain of our lame photoshop skills: If I can just get the perspective right on this screen capture of The Register home page, it'll make a good picture for the photo caption competition. Yeah, you're not going to win by pointing that out. Are you listening Steven Raith? Paul Westerman gets some latitude for I'd do a better job of this screen shot but I'm not a Corel snake

Show us that you are a regular reader and we’ll warm to you so Peter Gathercole saying "I'll know I can take that meerkat. I'm sure there was a picture of it round here somewhere" gets some credit, but not enough to win. Ben Bonsall with It's Friday lunchtime already, so where is the BOFH story then? clearly logs in for a regular fix, and so does Phil O'Sophical: That blonde won't half get a surprise when she opens this one on the beach.

As we wore out the 4 and 6 keys on our Nokia 3310 we rather liked sjaddy: When someone was bringing back the retro games, this wasn't the type of Snake I was envisioning!.

Some El Reg readers never take off their infosec hats, clearly and 6x7=42 had this: This malware infestation is getting out of hand. The same goes for Chris Griffiths: The IT admins were getting serious about clamping down on people forwarding joke emails....

Simon's latest order from Amazon may need to be returned is great, but Antonymous Coward, no name, no win.

Generally the knowledge of herpetology among the entrants was poor. Paul Westerman: No arguments, I'm just the default constrictor and adnim: I told you... it rattled when I shook it.

So let’s look at the top ten:

9. disgustedoftunbridgewells: Revealed: Who's really behind all those 'I for one welcome our reptilian overlords' posts.

8. Frumious Bandersnatch: On the internet, no one knows you're a snake.

6. lawndart: Of course I'm on the keyboard. I'm not a monitor lizard.

5. JoshTheGeek: Finally a use for those overheating Macbooks.

4. Rol: Touchpad! I hate touchpads. I want a mouse please.

3. Omgwtfbbqtime: It was simple to tell the cooling fan had gone titsup.

You all get nothing, not even the dead mouse the snake rejected because it was in shed.

The winner is the very first entrant Barely registers with Biting the hand that writes IT.

Well done, Western Digital will be in touch for your address.

Now is the chance for you to win a similar Western Digital Black 6TB drive. Western Digital has a range of drives aimed at the desktop market and the newly launched 6TB Black is the fastest of the lot.

This is the top-of-the-range WD drive with a 128MB cache, sustained data rate of 600MB/s, StableTrac to cope with vibrations caused from the sub-woofer in a hardcore gaming system, and dual processors.

This week’s photograph for the caption completion comes from Intel which has just announced that it’s working with a fashion company to produce a Smart Bra: 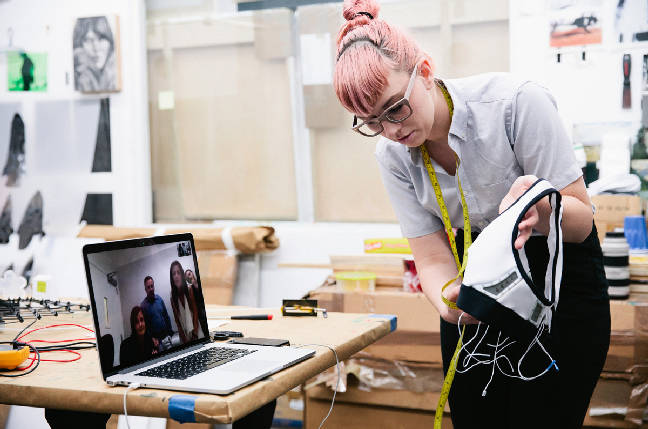 We’ll restrain ourselves from comments about this week’s picture, because it’s a caption competition and the jokes are your job.

Normally we say please try to keep it SFW, but given the content... If you want to be considered, please don’t hide as an anonymous coward, and if you win we’ll need a UK mailing address.

We’ll look at how many upvotes comments get and then ignore that and pick the one we like anyway.

If you want to find out more about the drive, you can check out the Western Digital website, and if you fall into the "I never win anything" or are just pants at captions you could always buy one. Or you could just go to look to see how cheap we are with our prizes. ®