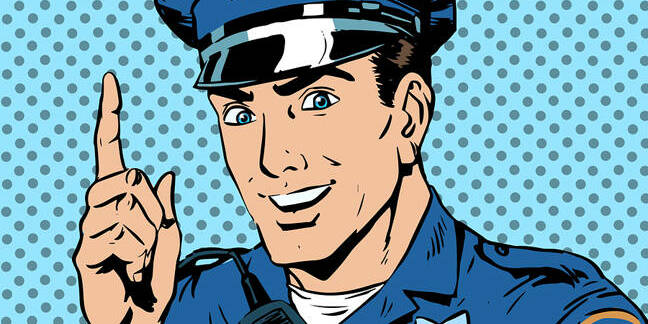 PDF Librarians in New Hampshire, America, were warned that running a Tor exit relay on their network would assist child abusers, drug dealers, and terrorists.

Those are the remarkable facts that have emerged from a freedom-of-information request filed over the decision by Kilton Library in Lebanon, NH, to host, then take down, and then restore an exit relay of the anonymizing service in their small town.

The documents [PDF] also show the level of attention being paid to the anonymizing service.

After a special agent at the Department of Homeland Security (DHS) in Boston, Gregory Squire, noticed a newspaper article about Kilton Library's decision to install a relay for "The Onion Router" service, he emailed a colleague nearby in Portsmouth complaining: "Just terrific ... that kid seems to be thinking just an inch past the end of her nose."

He was referring to Alison Macrina, founder of the Library Freedom Project, who was trying to persuade libraries across the US to add to the current 1,000 exit nodes that exist in the Tor system, and so make its anonymous service more robust.

Where Tor advocates see the system as allowing people to communicate without fear of surveillance, such as journalists and whistleblowers, or NGOs in countries that monitor communications, Homeland Security sees nothing but an opportunity for criminals to try to hide their actions.

The person who received the email, the commander of New Hampshire's "Internet Crime Against Children Task Force," Thomas Grella, then contacted Sergeant Richard Norris at the Lebanon local police station. He and a colleague then contacted and met with the library's IT director, library director Sean Fleming, and a number of unnamed city officials.

According to Norris' memo on the meeting, written in response to the freedom-of-info request:

Lieutenant Isham and I expressed our concerns from a law enforcement perspective on the TOR relay and the issues that could arise from it. We spoke about how the anonymity of the service would make it very difficult to track people engaged in criminal activity, such as child pornography, drug transactions, and terrorism. At the end of the meeting, Sean Fleming advised that the TOR relay would be taken offline pending the next meeting of the Library Board of Trustees in September 2015.

It's clear from a subsequent email exchange that library director Fleming was persuaded that the Tor relay should be taken down.

He wrote to city manager Paula Maville and Sergeant Isham ahead of the Board meeting, noting: "My stance has not changed regarding the advisability of having a Tor presence at the library at this time: I do not think it is a good idea."

At that Board meeting, however, Fleming was overruled by the Trustees, who decided to turn the relay back on following some forceful arguments from locals.

The meeting was notable for having both the police representatives and the Library Freedom Project founder Macrina talk. In addition, around 50 local residents turned up and those that spoke made it clear that, to their minds, the issue was one of free speech.

Just before turning the relay back on, board chair Francis Oscadal summed up his view: "With any freedom there is risk. It came to me that I could vote in favor of the good ... or I could vote against the bad. I'd rather vote for the good because there is value to this."

According to Macrina, since the decision was made and following press interest in the saga, more than a dozen other libraries have inquired about adding their own Tor relay. What is clear, however, is that from a law enforcement perspective, Tor is viewed as a threat. They are prepared to recall the very worst aspects of human nature to persuade people not to embrace it.

It is, of course, a supreme irony that the Tor project is partly funded by the US government. Meanwhile, the NSA labels anyone who uses the network, or even searches for information on the network or similar online privacy tools, as a potential "extremist." ®

Get used to hearing once again: 'We were only following orders'