Supermassive Sagittarius is firing off X-rays

The supermassive black hole at the center of our galaxy has become a lot more active in the last year, and now the scientists think they've worked out why.

The black hole, dubbed Sagittarius A*, has been monitored by space telescopes for the last 15 years. It usually emits a bright X-ray flare – generated about every ten days – as a result of gas flowing into the black hole. But in the past year, Sagittarius A* has been flaring off roughly every 24 hours, and sometimes more often than that.

In late 2013 astronomers spotted a mysterious ball of gas and dust swinging past Sagittarius A*, which the scientists called G2. The mass passed by the black hole with very little gravitational distortion, leading some to speculate that it was in fact a star, or pair of stars, in a dusty cocoon.

"There isn't universal agreement on what G2 is," said Mark Morris of the University of California at Los Angeles. "However, the fact that Sagittarius A* became more active not long after G2 passed by suggests that the matter coming off of G2 might have caused an increase in the black hole's feeding rate." 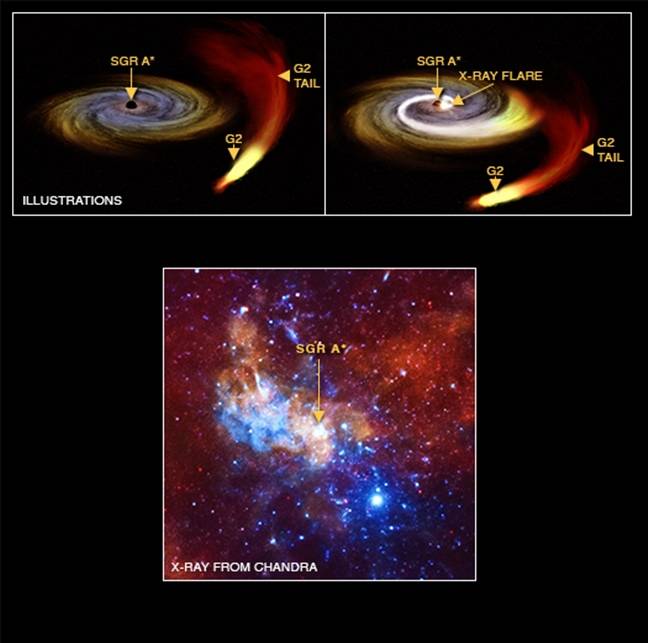 Several months after the closest approach of G2, Sagittarius A* started getting rambunctious. By the middle of last year the black hole was sending out flares much more frequently than before, including one spell in September 2014 where it sent out six in three days.

"For several years, we've been tracking the X-ray emission from Sagittarius A*. This includes also the close passage of this dusty object," said Gabriele Ponti of the Max Planck Institute for Extraterrestrial Physics in Germany. "A year or so ago, we thought it had absolutely no effect on Sagittarius A*, but our new data raises the possibility that that might not be the case."

The cause of the flares could be gas or matter stripped off G2 as it trundled past the black hole. Alternatively, it could be that black holes just get more active from time to time – the faster flare periods have occurred in other black holes outside of our galaxy.

The only way to find out is to carry on looking, and the team will continue using NASA's Chandra X-ray and Swift observatories and the European Space Agency's XMM-Newton X-ray viewer to find out what's going on. ®