VW: Just the tip of the pollution iceberg. Who's to blame? Hippies 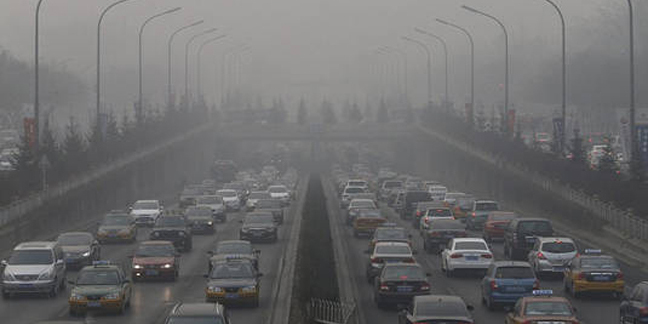 Comment Volkswagen, one of the world's biggest car groups, is in serious trouble this week as it turned out that millions of its diesel engines have been emitting vast, prohibited amounts of polluting nitrogen oxides (NOx).

The fact is, however, that the Volkswagen story is only a small part of the NOx story – in which the human race is busily poisoning itself in a pretty much pointless quest to cut back on emissions of carbon dioxide.

Volkswagen is being rightly condemned from all directions, as its methods were particularly cynical: its engine software would sense when the car was in a test environment and cut back NOx output temporarily.

As soon as the car was no longer under test, the car would change mode and emit huge amounts of NOx. This wasn't done for no reason – if a machine is allowed to generate NOx freely, it can be very fuel-efficient – and thus, of course, its carbon emissions can be very low too.

The basic problem is that air itself is a mixture of around 78 per cent nitrogen (N2) and oxygen (O2). When you burn hydrocarbon fuel, as the human race has done to obtain most of its energy for the last million years or so, the hydrogen (H) and carbon (C) in the fuel (coal, wood, gas, oil or whatever) react with the oxygen in the air.

If things went as well as they possibly could, the only resulting chemicals would be H2O and CO2: water steam (largely harmless) and carbon dioxide (only bad for humans in very high concentrations which are pretty much never reached – but capable of causing global warming to a poorly understood degree at much lower concentration).

Many would say that CO2 is quite bad enough, but unfortunately when fuel is burned, things don't normally go this well. Commonly, some of the fuel doesn't get burned and emerges as black carbon particulates – that is, soot. Soot warms the planet up too, perhaps just as badly as CO2. It's bad for people in the world today, and it can also clog up and knacker the machine that produces it.

Another thing which happens a lot is that fuel burns only partially and comes out as carbon monoxide (CO). Like soot, this is a lot more poisonous to people than CO2.

There are various ways to make machines produce less soot, monoxide and dioxide for a given amount of energy. Unfortunately – especially when trying to reduce CO2 by achieving greater efficiency – they often involve the use of higher combustion temperatures.

At higher temperatures, the nitrogen in the air starts to combine with oxygen to form NOx; and this process starts to run away exponentially as the temperature climbs through 1,100°C.

NOx is really bad for people, both on its own and because it causes the formation of ozone (O3: highly desirable high up in the sky to ward off ultraviolet from the sun but poisonous when breathed). NOx also causes acid rain.

There are various other significant emissions issues – sulphates from coal burning, for instance – but we'll pass over them for now.

Getting back to the wider issues of hydrocarbon burning, you'll note we've mainly said "machine" here so far, not "motor" or "engine". That's because these principles apply to pretty much anything that burns hydrocarbons, not just vehicles.

Fireplaces, stoves and ovens, boilers, the great majority of power stations, various industrial processes, you name it: almost all the human race's energy – including the great bulk of the "renewable" component, as most supposedly-renewable energy today is produced by burning hydrocarbon biofuels – is subject to these trade-offs.

All these matters of basic chemistry have been pretty well understood for a long time and nothing has changed about them. What has changed lately is politics and regulations: specifically, the crusade against CO2. Key governments, perhaps principally those of the UK, California and the EU, from around the turn of the century have introduced all kinds of regulations aimed at cutting emissions of CO2.

This has, of course, been inspired by campaigning from such organisations as Greenpeace. For those wondering about our headline today, we should note here that it is official Greenpeace policy that all its personnel are hippies.

It is a centrepiece of hippy thinking that massive cuts in CO2 emissions can and must be made, and that this can and must be done without any use of nuclear power. This means that energy from burning hydrocarbons, whether fossil or biofuel, must be used and produced much more efficiently: nobody seriously thinks that the human race can power itself using renewables. (In any case, in practice the hippies are against non-hydrocarbon renewables too.)

This agenda has gained a lot of traction in such places as Whitehall, Sacramento and Brussels. As a result a lot of regulations and taxes have been brought in or amended over the last couple of decades, to create a favourable financial background for low-CO2, energy efficient machines.

Examples include the UK Building Regulations, which nowadays insist on the use of high-efficiency condensing boilers. These burn less gas and emit less CO2, but produce a lot more NOx than their predecessors – quite apart from their many other problems.

Another result has been that the transportation industries, especially in the UK and Europe but also these days in the USA, have moved massively toward the use of modern, fuel-efficient turbo-diesel engines. Fuel-sipping small diesel cars pay no vehicle-excise/"road" tax at all in Britain, and even quite powerful diesel SUVs can often dodge other bullets such as enhanced rates of London Congestion Charge. At one point it even seemed that we might start seeing turbodiesel-powered helicopters.

Next page: You think booze is bad for you? It's not as bad for you as HIPPIES
Page:
Tips and corrections
199 Comments