Yeah, yeah, yeah. So it turns out Clara and Missy escape from the death-by-Dalek shocker in the first episode of this two-parter for the opening of Doctor Who, Season 9. Vortex manipulator For The Win.

And the TARDIS is also intact, courtesy of its hostile action dispersal system.

But let's get straight to the thing that surely irks every single one of us: sonic sunglasses – what were you thinking, Steven Moffat?! No, no, no.

I rather like the throwaway explanation for the Doctor's decision to suddenly adopt wearable tech: "I'm over screwdrivers. They spoil the lining of your jacket."

Still, come off it, Doc. You didn't suddenly ditch the screwdriver for gizmos that have actually taken off in a big way, such as mobile phones or even, dare I say it, fondleslabs. So what's with this weirdy homage to Google? And can we expect to see the Time Lord ditching the creepy tech specs for an Apple Watch in Season 10? I bloody hope not.

That said, perhaps Moffat is playing with all of us, and the sonic specs are simply a stop gap bit of kit to allow for the plot to move on.

Does the final scene in the Witch's Familiar dangle a tantalising clue and might the Doctor once again return to a young Davros to rescue said screwdriver and (for the audience) his reputation?

We see boy-Dav clutching the now-abandoned sonic screwdriver and wandering off hand-in-hand with his rescuer, the Doctor, who just so happens to be grasping a Dalek gunstick, which a dying-not-dying Davros earlier tells us is an "ancient" bit of equipment.

What if that gunstick is the genesis of the entire race of Daleks? 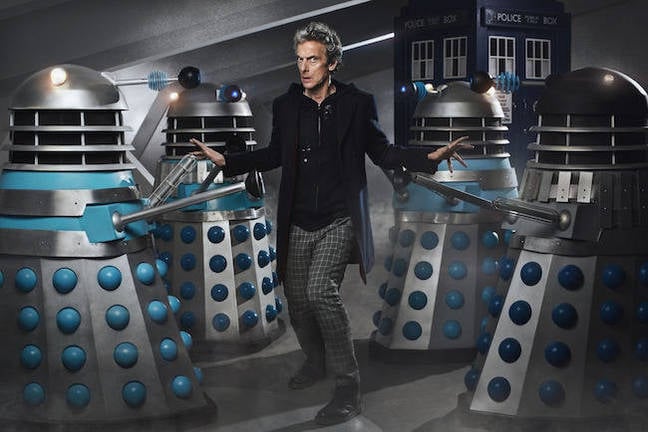 Did the young Davros end up in possession of the gunstick? Also, what became of the sonic screwdriver? The two things that could (maybe) help to bring about a Time Lord-Dalek hybrid mutant.

We see in this episode that Davros hopes to create such a being. And, while the audience is led to believe that the Doctor's arch-enemy is toast as old, zombie-like Dalek gunk (or canned primordial soup, perhaps) rises up from the "revolting" sewer, AKA graveyard, of Skaros to attack their roast peanut-faced creator – we don't witness his last breath.

All of which surely promises more Davros as this season's story unfolds.

Meanwhile, tricksy Missy – having failed to hoodwink the Doctor into killing Clara, who is hidden inside the casing of a Dalek and discovering that her love is suddenly expressed as violence: "Exterminate!" – hints at yet another return.

Is the Witch's Familiar really just grappling with compassion and mercy, though? Or is a dark secret about the Doctor and the Daleks yet to be revealed to us?

Or maybe, just maybe, I've come up with this entire scenario so as those damn glasses are binned in the not-too-distant future.

Setting aside my sonic specs angst, Doctor Who has opened with a bang. I really hope Moffat, his team of writers and crew sustain the quality of this story-telling throughout the season.