Spirit of the Ghost: Taking a Rolls-Royce Wraith around France

There and back again in seriously British hi-tech luxury

Vulture at the Wheel There used to be a tradition on Personal Computer World magazine of writing reviews on the computer you were reviewing. This is being written from the passenger seat of a Rolls-Royce Wraith travelling between Dijon and Reims.

The two-door, four seat Wraith has just become the Rolls-Royce of interest because the company launched the Rolls-Royce Dawn. The newest car might claim not to be a convertible version of the Wraith, but then marketing men claim all kinds of things.

Engineering a roof of the speed, insulating quality and fit of a Rolls-Royce should be enough for them. Ultimately the newest Rolls-Royce is a convertible version of what you see here. So if you’ve just sold your dotcom startup to Google, should you be adding your name to the waiting list?

When you get a Rolls-Royce to review for four days you need to go somewhere. The obvious destination for a Rolls-Royce is Monaco. A thousand miles from London, this was a two thousand mile trip in under a week. So, off we headed.

There will be more about why, who and where in a separate article but for the moment the important fact is that four of us drove from London to Monaco in a day. We spent a day there and drove back over two days, taking in the classic Route Napoleon on the way back. We left at 8am, an for 11:20 Eurotunnel booking, and arrived at the house where we stayed near Monaco at 3am the following morning. An eighteen hour trip, when you allow for the time difference.

All of it was pretty much non-stop aside from refuelling the car and people, and the bit on the train. Rotating drivers at the stops meant that although we arrived late, none of us felt tired or stressed by the journey. In the spirit of the trans-continental grand tourer the Wraith has it licked. 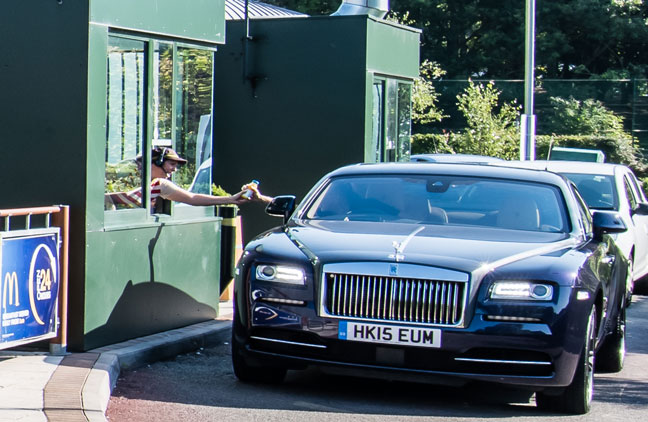 No time to lose on the way to the tunnel. McDonalds supplies people-fuel 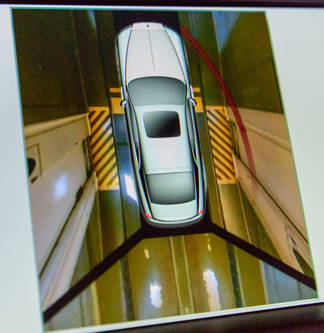 Clever software and wide lenses give a Vulture's-eye view

The car has presence. It’s beautiful and muscular. It is also very big, at more than five metres long and a shade under two metres wide. Indeed, we took it into the “high” vehicles section of the Eurotunnel because that doesn’t have toilets in the train and so is wider. We didn’t need the height – it’s only 1.5 metres tall – but we did need the width.

The Wraith has ultra wide angle cameras in the sides and front. These, as with a similar system on the Nissan Qashqai use image processing software to knit the views together and give a third-party eagle's-eye view. It made the train boarding very much less stressful than we expected.

The review car was two tone blue and grey, which is a little subtle but looked great in strong sunlight. Of course, no car manufacturer describes its colours in such simple terms and so it’s called “Dark Indigo” and “Gunmetal”. Both are metal flake paints with a great lustre.

The dark blue hand-painted coach lines were a little lost against the gunmetal but the finish is superb. There is an athletic haunch to the shape; it looks like a coiled spring even when it's still and it conveys a sense of power. There is a huge Rolls-Royce signature radiator topped with a Spirit of Ecstasy but the radiator is aerodynamically curved, adding to the sense that it’s moving and Eleanor Thornton* emerges from a painted rather than chrome top to the radiator. The super-bright LED lights have little RR logos in them. 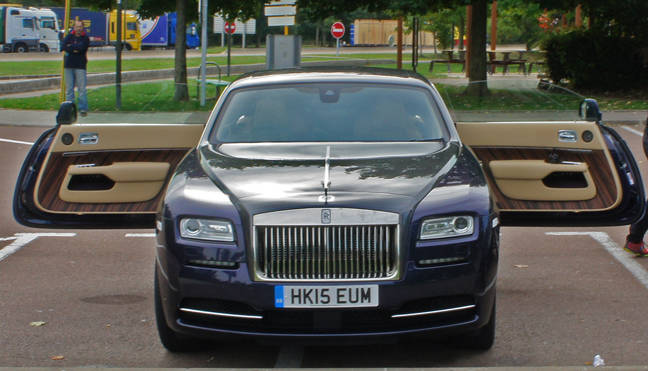 The big trick feature of the Wraith is the doors. These hinge from the back and open very wide to allow space for the rear passengers to get in. This means you cannot reach the door handle from the driver’s seat. To solve this problem the doors are electric, buttons behind the A-pillar control the doors and boot.

The nice man from Rolls-Royce who delivered the car warned me that you must look carefully before opening the doors and that he’d collected a lot of loan cars which had been returned with dented doors.

The design of the door has a crease in it which breaks up the line, but we had a heart-in-the-mouth moment thinking that it wasn’t design but the result of a prang. The closing mechanism isn’t quite as Rolls-Royce as you might hope, while it’s very, very cool it is a little jerky. 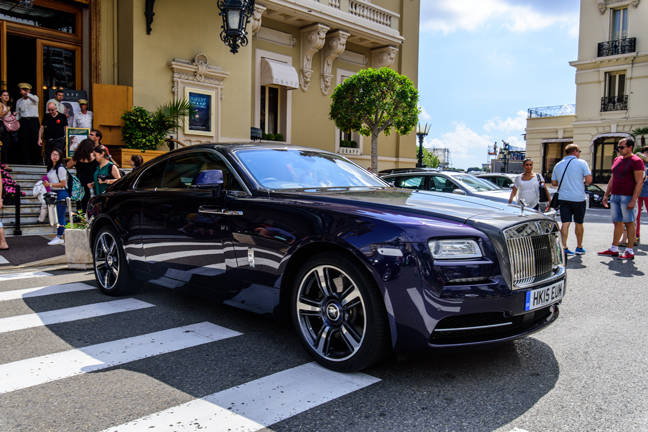 The crease in the door is a styling feature

Space in the back is good. We were a little concerned that given the road trip we had planned: 2,500 miles in four days, we’d find a two door a bit cramped and started to think that we should have asked for a Phantom. That was not the case. The business class seats might not recline in the back but proved wonderful for armchair-snoozes. It’s part of what made the 3 am arrival so easy. There are buttons to electrically slide the front seats in the back of them so that the rear passenger can adjust the position.

This is so much better than the usual “have you got enough room back there”. The centre console at the back means there is no chance of squeezing a third person in. This is a strict four seater. There is no storage space or fold down tables in the back of the seat either but there is power including a USB socket.

The deep, plush carpets in particular provoked comments, one of the driving team saying that he thought he should change into slippers when he boarded.

Next page: Riding along in my automobile ...
Page: