Pics NASA has had the space community on tenterhooks for the last week, and on Monday made its big reveal – there is liquid water on Mars.

"Liquid water has been found on Mars," said Jim Green, director of planetary science at NASA Headquarters at a press conference on Monday.

The research, published in Nature Geoscience, analyzed recurring slope lineae (RSL), dark streaked gullies that appear on some sections of the Martian surface during the summer months. Spectrographic analysis from the Mars Reconnaissance Orbiter (MRO) has shown conclusively that these are caused by briny liquids.

The results show that the brine is a mix of chlorates and percholorates that bind themselves to water as Mars warms up for the summer. The fluid moistens the soil and creates the gullies, and gives hope that there may be significant water under the surface. 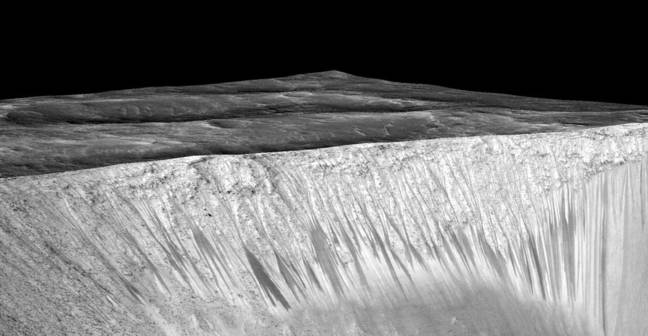 "We found the hydrated salts only when the seasonal features were widest, which suggests that either the dark streaks themselves or a process that forms them is the source of the hydration," said Lujendra Ojha of the Georgia Institute of Technology, lead author of a report.

"In either case, the detection of hydrated salts on these slopes means that water plays a vital role in the formation of these streaks. When most people talk about water on Mars, they're usually talking about ancient water or frozen water," he said. "Now we know there's more to the story. This is the first spectral detection that unambiguously supports our liquid water-formation hypotheses for RSL."

Perchlorates are very soluble in water, and their addition increases the temperature range of water on Mars. Pure liquid water can only exist in the open on Mars between zero and 10 degrees centigrade, but with perchlorates it can remain liquid between -70 degrees centigrade to 24 degrees.

"Everywhere we go there's liquid water we find life," said Green. "This is tremendously exciting; we can't answer the question as to life being beyond Earth, but we now have the right locations to actually investigate that with surface assets."

Alfred McEwen, principal investigator for the High Resolution Imaging Science Experiment (HiRISE) on the MRO, said that the chance of finding life in the subsurface of Mars is very high, and the odds have been strengthened by the new findings.

Green said that there was still a lot of testing to do, both in the air and on the ground. The MRO has been in orbit for nine years and has still only scanned about 3-4 per cent of the Red Planet in high definition.

In addition, NASA wants to use the Curiosity rover to check out RSL subjects. The rover is currently on Mount Sharp and RSL images have been found on the mountain. If the rover can get to them, its onboard laboratory will be able to tell us much more about the liquid.

There is, however, a problem. John Grunsfeld, associate administrator of NASA's Science Mission Directorate, said that the Curiosity rover was sterilized of Earth life as much as possible, but it might be determined that the decontamination process wasn't enough, and that this may skew the results.

It's possible that NASA's 2020 mission to Mars by Curiosity version 2.0 could be better equipped to do the job, Grunsfeld said. There's also the problem of their location – the RSLs are typically on steep slopes that may be unsuitable for a rover. ®