Rosetta comet boffins: We can explain why there's a rubber ducky IN SPAAACE

Euro probe studies two rocks for the price of one

Pics Findings from the European Space Agency's Rosetta probe solved the riddle of Comet 67P/Churyumov-Gerasimenko's unusual shape. They have proof that the comet is in fact two planetary bodies joined at the hip.

ESA's Rosetta probe took ten years to reach its target last July and, when it did, the science team had a bit of a shock. Normally comets are roughly circular, but this example looked more like a rubber duck, with a large body and smaller head supported by a thin neck. It's approximately 4 kilometers across, measured the long way.

The prevailing theory was that the comet's unusual shape was down to a low-speed impact of two separate bodies, which had collided and then stuck together. But it was possible that it was one body that had received a sharp impact, and then eroded on the comet's trips around the Sun.

Between 6 August 2014 and 17 March 2015 Rosetta took a series of high-resolution pictures of the geology of 67P and the results are now in. The comet is definitely two objects joined together, and the proof is in how the surface of the comet is layered. 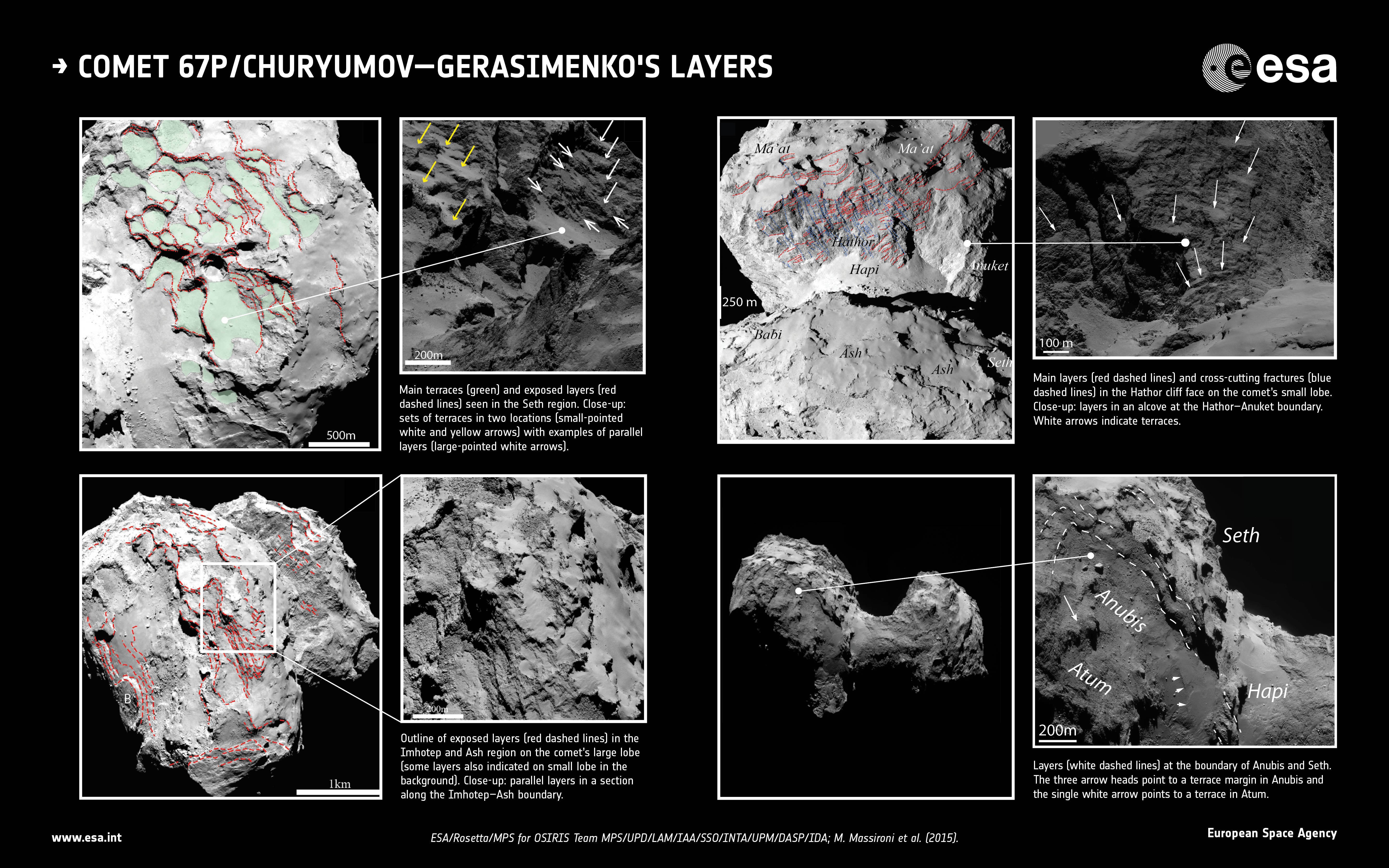 "It is clear from the images that both lobes have an outer envelope of material organized in distinct layers, and we think these extend for several hundred meters below the surface," said Matteo Massironi, from the University of Padova, Italy.

"You can imagine the layering a bit like an onion, except in this case we are considering two separate onions of differing size that have grown independently before fusing together."

The surface of the comet is made up of parallel layers of matter built up over time, in some places viewable along 650 meters deep into the comet's body. These layers surround a central nucleus, but the layers on the two lobes of the comet don't match the findings you'd expect if the object was formed from one large object.

"This points to the layered envelopes in the comet's head and body forming independently before the two objects merged later," Matteo said. "It must have been a low-speed collision in order to preserve such ordered strata to the depths our data imply."

That said, the geology of the two objects is similar, and also ties in with data from other comets that mankind has gotten a look at. So while 67P is odd, it's not that odd.

"This result adds to our growing knowledge of the comet – how it formed and its evolution," says Rosetta project scientist Matt Taylor. "Rosetta will continue to observe the comet for another year, to get the maximum amount of information on this celestial body and its place in the history of our Solar System." ®