Screenshot Some Apple iPhone 6S Plus owners are complaining that their new handsets get too hot – with one bod yelling that the LED flash shuts down.

Someone on Reddit posted a screenshot of an alert message the 6S Plus apparently displays when the gadget is running too warm for the flash to safely work – potentially plunging the camera app into darkness.

The Redditor said he was trying to use his new smartmobe in Tuscon, Arizona, on a (relatively) cool September day, with an outside temperature of 88F (31C).

"The phone hadn't been used for anything intensive or demanding prior to trying to take pics, just cruising through Facebook randomly, and was stowed away in my back pocket mostly," a bod called bcarp914 wrote.

"I've noticed this phone, 6S Plus, has been the warmest to the touch of all the iPhones I've owned." 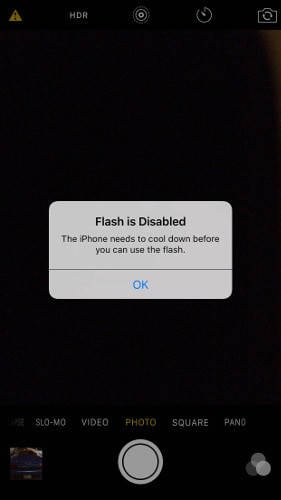 Apple says the iPhone 6S and 6S Plus is designed to work in ambient temperatures between 32F and 95F (0-35C).

What's causing the thing to overheat, and could it be its new brains? The 6S and the 6S Plus run faster than previous iPhones: they are powered by a dual-core 1.84GHz A9 processor, a 16nm part, whereas its predecessor, the 6, has a dual-core 1.4GHz 22nm part.

We wondered if this is a spoof – a fake screenshot created by a prankster – but iOS does react with on-screen warnings when devices get too warm. We tried overheating our iPhone 6S Plus in the office, but couldn't trigger the error message.

Whether the issue is a recurring problem with the iPhone 6S Plus, an isolated incident, or a bit of trolling from a rival fandroid, remains to be seen. Other Redditors in the thread reported their 6S Plus handsets getting unusually warm when downloading or installing apps, though none reported similar camera flash problems.

"Just got my new iPhone and it's VERY hot after syncing with the computer and backing up. Never had this issue with any other phone," writes one person.

The problems wouldn't be the first to befall the Apple phablet. Last year's iPhone 6 Plus model was subject to an infamous bending issue when some owners moved around with the handset in their pockets.

Other iPhone models have also been reported to overheat as well, in some cases causing injury. Back in 2011 Apple had to recall its iPad Nano over fears the player's battery could become dangerously hot.

Apple does not respond to The Register's requests for comment. ®