Mobile first? Microsoft decides to kneecap its Android users instead

Comment Microsoft can often resemble a heavily armed octopus trying to shoot itself in the head. But even after 25 years of watching Redmond's finest, it still has the capacity to astonish us with the imaginative ways it can screw things up. It gave us another example last week.

Mobile platforms are vital to Microsoft, but it doesn't own the mobile platforms, with Windows bumping along at well under five per cent market share globally.

So, incoming CEO Satya Nadella made a brave decision: all Microsoft's software would run on iPhone and Android, and it would be a first-class citizen.

We now have excellent versions of Office and Skype on Apple and Google platforms, but not-so-great versions on Windows. Even Cortana is here on Android and will come to the iPhone.

Garage projects like Send appear on iOS or Android first, not Microsoft's own platforms. The justification was that if consumers were using Microsoft's cloud services, it would remain relevant.

However, what about Microsoft's mobile lifeline to its consumer users? For them, it's been a less happy story. Microsoft had around 400 million Hotmail/Live users when it superseded it with Outlook.com two years ago. That's far short of the 900 million users now boasted by Google and WhatsApp, and Google users are far more active than Hotmail users.

But if you were an Outlook.com user who only used the website, you were probably pretty happy. It's a first-class consumer service, with real push email (you need to pay for that with Gmail), folders and categories which are far richer than Gmail's labels, plus a handy sweep feature for managing nags and junk.

And, it didn't read your personal email and try and sell you ads against the contents. More recently, Outlook.com got upgraded to Office 365.

Surely those brave Outlook.com users would soon enjoy the same stellar software that Microsoft's billion Exchange users demand? You'd think so, but if anything, it's gotten worse.

Until last week, Microsoft supported Outlook.com users on Android with a bare-bones but functional client, Outlook.com. Because the Outlook.com client exposed the calendars to the Android system, any Android calendar app or widget could read and write to them.

Last December though, Microsoft acquired a startup called Acompli, figuring it was quicker than writing its own Outlook client, and Acompli was rebranded as Outlook. Last week, Microsoft finally shut down the older Outlook.com app, leaving consumers to use the rebranded Acompli.

But Outlook has never exposed the calendars to the Android system, so the effect of the change was sandboxing Outlook.com users into the new client.

They're not happy bunnies. As you can see here. The improvement "Sync Calendar with Calendars on Device" has gathered almost 8,000 votes in a week in the mobile Outlook suggestion box. 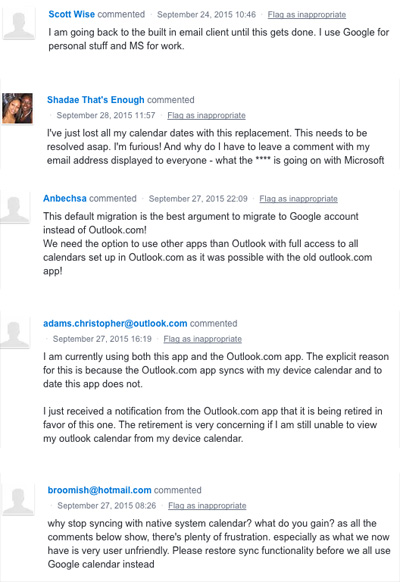