Turn and face the strain

What’s new under the glass is a new layer of strain gauges, responding to the distance between the surface and the backlight, which reduces locally when you push the screen with your finger.

This is 3D Touch, a term introduced by Apple during the iPhone 6s launch event and not clearly distinguished from "Force Touch", which it uses for the comparable but different haptic feedback system in the Apple Watch and – different again – in the latest MacBook trackpads.

Sensitive issues: blocks of capacitive sensors measure changes in pressure combined with the Taptic Engine that signals the actions which are being performed

Before seeing it in action, tech news sites made up giddy stuff about how 3D Touch would be quite different from the "long press" already commonly used in mobile UIs, giving an instant and intuitive response like the trackpad, which cleverly makes you feel like you’ve mechanically clicked something, rather than the Watch, which pauses mushily before delivering a buzz like a cheap game controller.

A tap, on the capacitive multi-touch screens that Apple has popularised, is a tap: the difference between not touching and touching. A click, on any kind of trackpad, is a click: pushing something far enough to feel it snap. A press is just an awkward continuum.

Even once you get your finger calibrated, there’s an appreciable pause between cause and effect. And the effect is a buzz which itself takes time, instead of being immediate.

It’s the difference between hitting a piano key and waving a baton at an orchestra. The latter takes confidence and experience, and you still don’t know quite what’s going to happen until you try it. 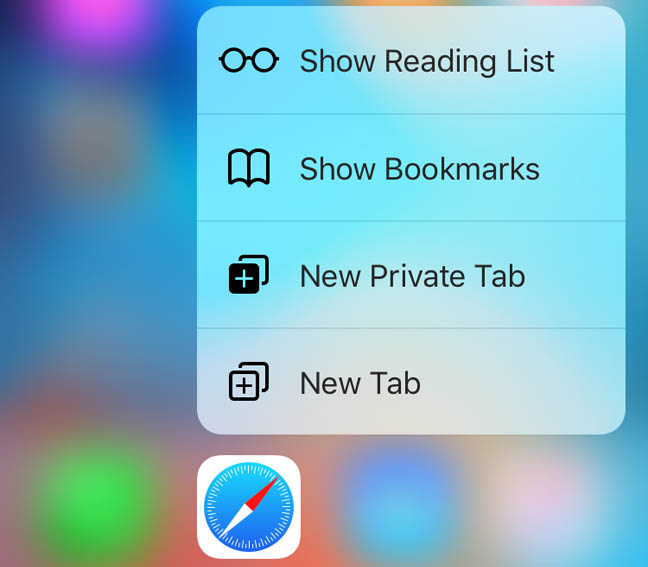 3D Touch works like a right-click on app icons, bringing up a contextual menu of commonly used options

Semantically, a press is a kind of right-click. Press an app icon on the home screen, and – after the wait and the buzz – a contextual menu pops up. On Clock, this lets you set an alarm. On Maps, you can get directions home, or drop a pin on your location. Apple calls these "Quick Actions".

A normal tap selects one. If none are available, you get a short triple buzz to put you off. You’ll probably find a couple of these short-cuts handy, but without desktop room for menus, they’re limited. Safari, for example, lets you open your bookmarks directly, but there’s no pop-up list of currently open tabs.

Inside apps, things get more interesting. In Photos, press a thumbnail – even in Collections or Years view – and that item pops up in the middle of the screen. If it’s a video or Live Photo (another new feature of iOS 9 which works exclusively with the 6s-series hardware), it plays. Any time you let go with your finger, it disappears.

Or, and here’s the ‘3D’ part, if you like what you see you can double down on your press by pressing even harder. Then – while the video, if such it is, continues to play uninterrupted, a nice touch – the item opens properly for editing or sharing. 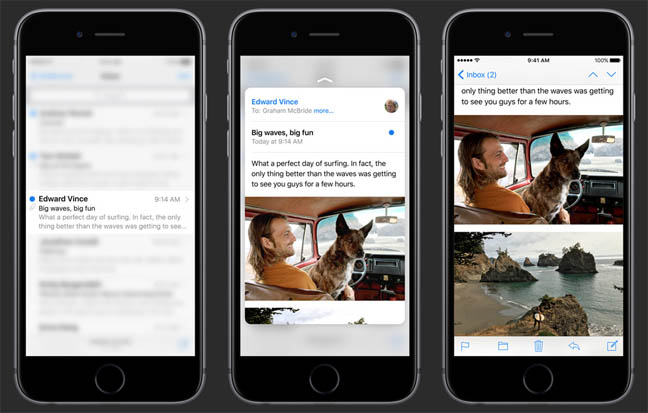 Within apps, you can press to "peek" an item from a list, then harder to "pop" it into its own view

This is a fine idea: rather than continually making selections that switch you to a new view, then figuring out how to get back, you just ‘peek’ and ‘pop’, in Apple’s whimsical jargon. It makes a space for innovation: press the on-screen keyboard, for example, and it becomes a trackpad, enabling you to place the text cursor.

Other app developers are beginning to find their own uses. But it doesn’t feel right.

Next page: I turned myself to face me
Page:
Tips and corrections
44 Comments