Hopes to end moans that consumer sync is more reliable

Microsoft is previewing a new client for OneDrive for Business cloud storage, following many complaints about sync reliability in the existing client, which was based on Office Groove.

OneDrive for Business is part of Office 365, where it is also known as SharePoint online. It uses different technology than the consumer OneDrive, and one of the puzzles – naming confusion aside – has been why the consumer sync client is generally more reliable than the business version.

“We heard your feedback on the sync experience loud and clear,” said Reuben Krippner, director, OneDrive for Business, in a video introducing the new client. “We’re delivering the next-gen sync client for both PC and Mac, and it’s based on the proven OneDrive consumer sync client.”

The new client, now in limited preview, adds OneDrive for Business support to the existing consumer client. Along with improved reliability, it removes the previous 20,000 file limit and supports files up to 10GB in size (good luck with that).

Microsoft is also refreshing the web interface to OneDrive for Business, making it more like the consumer version with a tile or list view.

Sharing files via special links is more granular, with an option to restrict access to only users of your Office 365 organisation, and there are also new admin controls so that individuals can be prevented from sharing files. Admins can also maintain global whitelists or blacklists of domains allowed to access shared documents.

There are various mobile clients for OneDrive for Business, all different. In this wave, the Android app is being updated to enable individual files to be taken offline, while the iOS app gets a PDF annotation feature.

The logic behind which app gets which feature is unclear. There is no mention of the apps for Windows Phone or Windows 10 Mobile.

Microsoft is right to address the problems with the OneDrive for Business client, which is notorious for failing to sync, or presenting the user with error messages, for which sometimes the only solution is to wipe and re-sync the entire folder. More commonality between the business and consumer versions is also welcome.

That said, even the consumer OneDrive client can be problematic, with problems like files getting duplicated for no apparent reason, in which case the various versions have the name of the source PC appended. Sometimes this happens even when there is apparently no difference between the versions.

Another issue is when OneDrive reports that the version on the server has been updated so that the local version cannot be synced, even when you are the only user, and puzzling out which version has your latest changes can be a challenge.

There is also a long-standing gripe about the abandonment of the placeholder view found in Windows 8. Using placeholders, File Explorer in Windows 8 displayed the entire contents of your OneDrive, but only downloaded files on demand, saving disk space.

Microsoft said the feature confused people, who thought they had files locally when they did not, as well as tripping up other applications in some scenarios, when they tried to read files that did not exist.

Users loved the feature though, especially those with small SSD drives such as on Windows tablets. Further, syncing everything is a crude solution and can be a security risk if a PC is stolen. The OneDrive client does offer manual selection of which folders to sync, but this kind of micro-management is tedious, and folders that are not synced become invisible to the client. 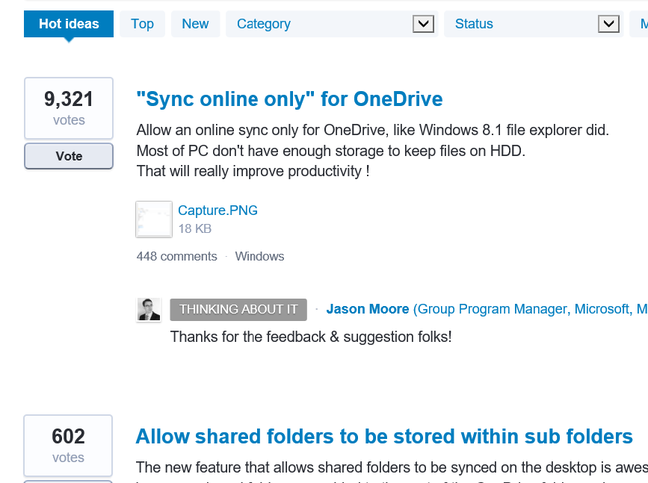 Requests for the return of a placeholder view dominate feedback

The OneDrive feedback site makes it clear that users want the placeholders back but the response so far is “thanks for the suggestion”.

The big question about the new client, both for business and consumer users, is whether it really offers the “rock solid sync” promised by Senior Director Seth Patton. If it does not, competitors such as Box and Dropbox may be more appealing. ®