The not-quite-planet-but-jolly-big-for-an-asteroid Ceres continues to give up its secrets under the unwinking gaze of NASA's Dawn probecraft, now in orbit about the planetoid. 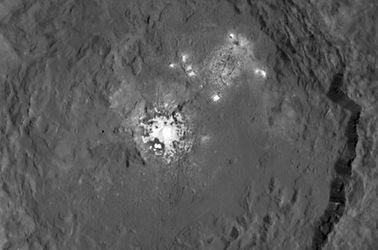 New developments include the naming of various features on Ceres and the detection of a mysterious particle blast from the enigmatic dwarfworld.

"Ceres continues to amaze, yet puzzle us, as we examine our multitude of images, spectra and now energetic particle bursts," said Chris Russell, Dawn's principal investigator.

One new map of Ceres includes more than a dozen officially approved names for features.

The names, all eponymous for "agricultural spirits, deities and festivals from cultures around the world" include a mountain near Ceres' north pole, with a diameter of 12 miles (20km) which has been dubbed Ysolo Mons, "for an Albanian festival that marks the first day of the eggplant harvest."

A full list of features' names is available here, and includes a crater dubbed Vinotonus, after the Celtic Briton god of vines, and another named Jaja, after the Abkhazian harvest goddess. 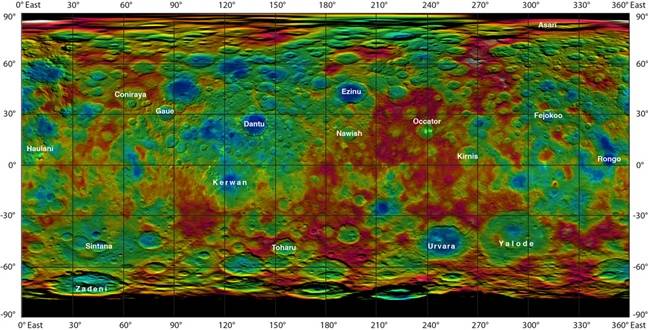 Other new Ceres maps featured colour-coded topographic images of the Occator (oh-KAH-tor) crater (below left), home of Ceres' spooky bright spots, as well as what NASA now reckons is a four-mile high pyramid (below right). 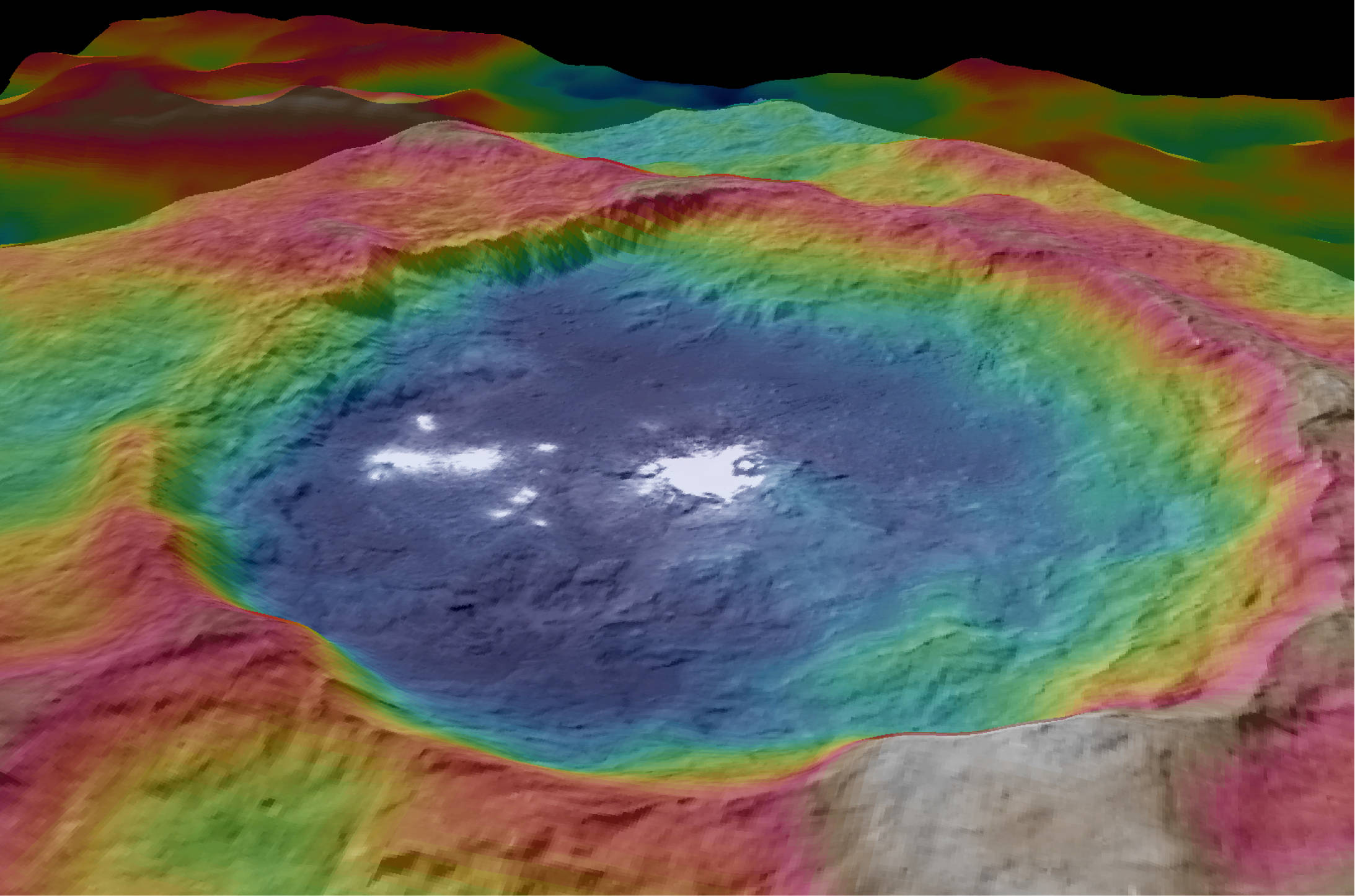 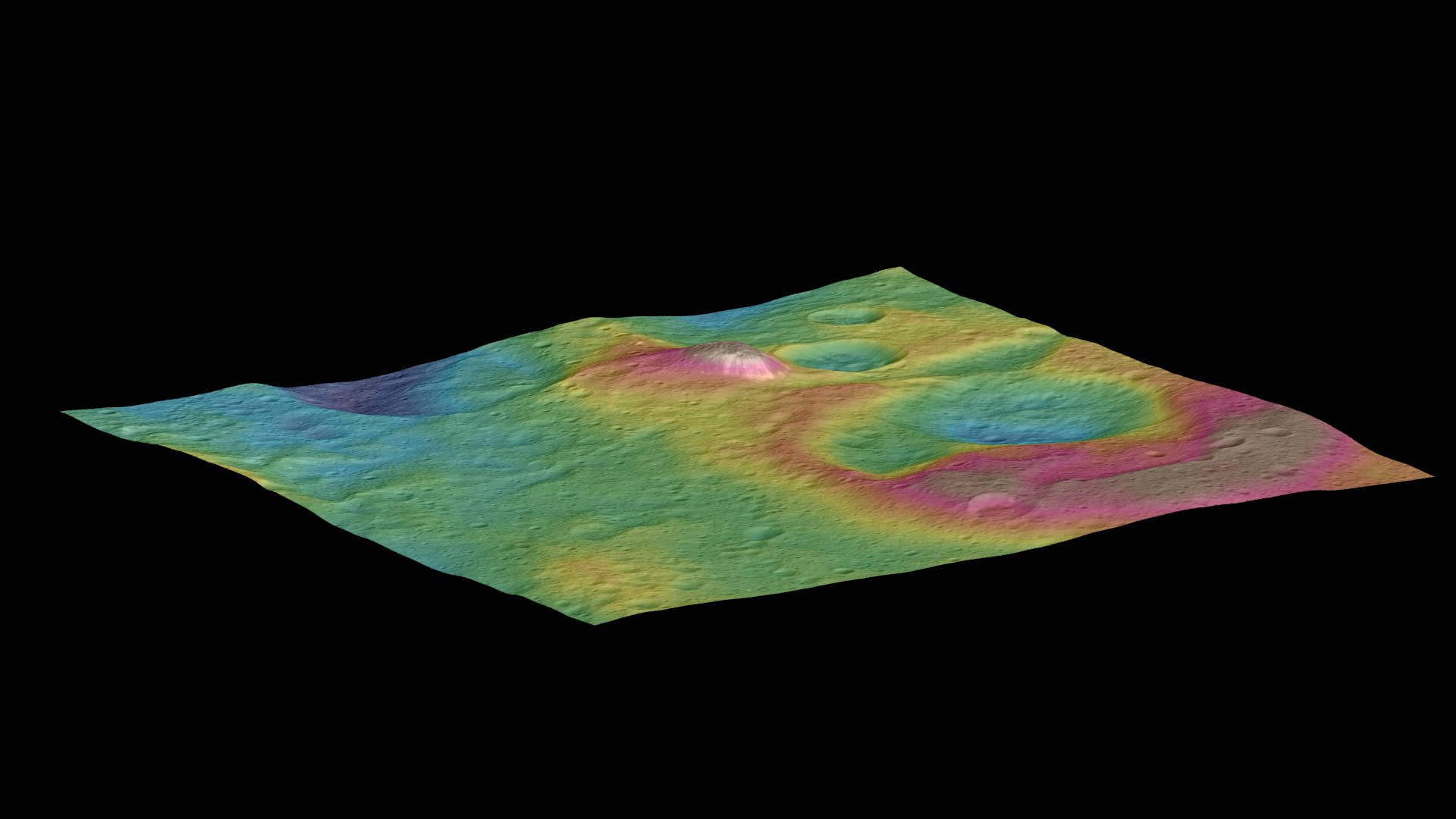 Scientists are still working to figure out how these "and other unique Cerean phenomena" could have been produced.

"They are very different from the bowl-shaped craters on Vesta," said Raymon. Vesta was Dawn's previous port of call, as it travelled to Ceres, which orbits the sun at the mighty distance of 413.7 million km (2.77 AU).

The instrument detected three bursts of energetic electrons that may result from the interaction between Ceres and radiation from the sun. The observation isn't yet fully understood, but may be important in forming a complete picture of Ceres.

"This is a very unexpected observation for which we are now testing hypotheses," Russell said.

Dawn is currently orbiting Ceres at an altitude of 915 miles (1,470 kilometers), and the spacecraft will image the entire surface of the dwarf planet up to six times in this phase of the mission, in imaging cycles lasting 11 days.

Starting in October and continuing into December, Dawn will descend to its lowest and final orbit, at the relatively miniscule altitude of 230 miles (375km).

Dawn is to continue imaging Ceres, as well as taking other data at higher resolutions than it have previously managed during this final orbit. NASA stated that the spacecraft will remain operational "at least through mid-2016." ®