Are you sure? Can you really tell with all that wool over your eyes?

The DCIG folks use an 8-step process to score and rank 28 array products from 18 suppliers, surveying each vendor's products and assigning their features to one of four categories: hardware, support, virtualisation, and management and software. The various tabulated items were then weighted and supplied to vendors for their comments.

Scoring was finalised after the updates received from vendors had been entered into the survey system. All vendors were given the opportunity to review their data sheets, without the rankings on them, shortly before the Buyer’s Guide was published.

Their rankings range from Best-in-Class through Recommended, Excellent and Good down to Basic. Vendors' products are ranked in these five areas for four categories and then given an overall ranking.

Note that there is no mention of user input in this method and no evaluation of the actual all-flash array hardware and softare in use: it is, as far as we understand, a brochure, data and spec-sheet exercise only. 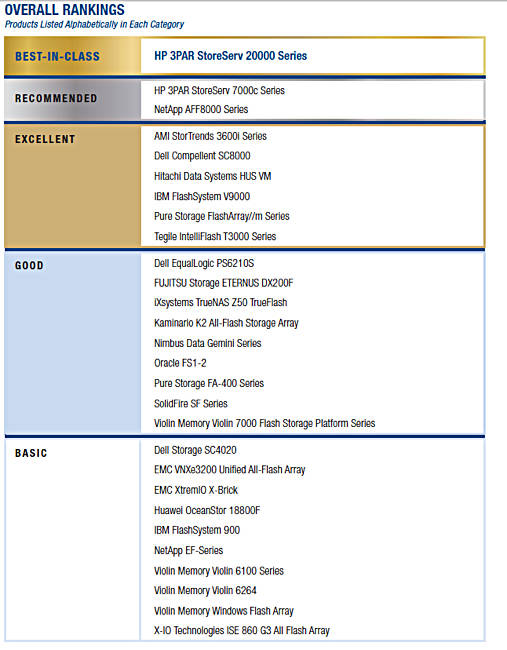 The rankings are remarkable, even perverse, with EMC's market-leading XtremIO X-brick product put on the same level – Basic in all three categories – as Violin's 6100, 6264, and X-IO Technologies' ISE 860 G3.

Nimbus Data's Gemini array, coming from a company whose website hasn't had a news update in over a year and which is being sued by a customer*, is rated Good overall by the DCIG brochure browsers.

To compound EMC's embarrassment, its VNXe3200 – also in the overall Basic slot – was given a Basic hardware ranking and a Good in the management and software, and virtualisation, rankings.

This bizarre result leaves us in total and utter confusion. Are all XtremIO buyers idiots? Has EMC pulled the wool over the eyes of customers who have bought a billion dollars worth of XtremIO kit in six quarters? Or has DCIG, somehow, pulled the wool over its own eyes?

Check out the report here. ®

* Nimbus is being sued by Maximus concerning a Nimbus array which Maximus alleges did not perform as it should. See the US District Court for Eastern California case number 2:14-cv-00841-JAM-KJN, Maximus, Inc. v. Nimbus Data Systems, Inc., which has a trial scheduled for February 29 2016 starting at 0900, according to the US Pacer website.