Review The second beta of Ubuntu 15.10 Wily Werewolf has arrived and there’s not much to see here.

Oh sure, there's some revamped scrollbars, Unity 7.3.2 that has some welcome bug fixes and Ubuntu's version of the 4.2.1 Linux kernel, but this is no lycanthropic beast of great transformation as the name might suggest. You won't find any major changes to Unity in this beta or, for that matter, the final release later this month.

Frankly, Ubuntu 14.04, a Long-Term Support release, had more changes than this.

Normally, I'd argue that's a good thing. No news is good news these days, when it comes to operating systems. Except Ubuntu's October releases have historically been more experimental, less stable releases that tried to push the envelope a little. It's been two years since we've seen that sort of fun-filled, experimental release from Canonical.

Unity 8 is under development out there somewhere and Canonical's vision of "convergence" is seeing some real, actually shipping devices on the mobile side.

But if you're a desktop Unity fan, patiently waiting for version 8, well, keep waiting. Or, if you crave something shiny and new, check out Kubuntu 15.10 beta 2, which ships with the Plasma 5.4 desktop environment. Visual changes abound in this Kubuntu.

Fans of the Unity desktop will just have to console themselves with the knowledge that at least Unity 7.x is, at this point, pretty rock solid and nothing in Ubuntu 15.10 will rock the boat in any way. 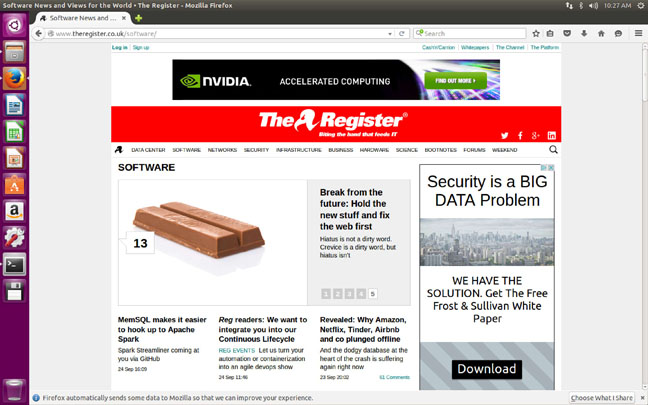 The most noticeable change in this release – the only visual change, really – involve the scrollbars. Yes, scrollbars. Canonical's homegrown versions have been ditched in favor of the GNOME scrollbars in GTK 3 applications (which accounts for the majority of Ubuntu apps).

The GNOME scrollbars have been themed a little to look like Ubuntu's old version, but the strange, handle-like thing is gone. The move seems primarily a result of the fact GNOME's scrollbars more or less now behave just like Unity's did. In other words, there's no need to duplicate scrollbar efforts.

The annoying thing is that while the behaviour of the scrollbars has changed, all the bad UI decisions remain – which is to say that even when there's scrollable content, Unity will still not show a scrollbar until either you hover the scrollbar or otherwise put the mouse in motion. How do you know there's scrollable content? Well, your guess is as good as mine. At least now Canonical engineers can move on to something more exciting than maintaining homegrown scrollbars, though.

The notable exception to the scrollbar change is perhaps the most used application on the desktop: the web browser. Chrome and Firefox both still use completely different scrollbars: both are built against GTK 2, though Firefox is moving toward a GTK 3 release – if you're lucky it might get here in time for 16.04 next year. LibreOffice also uses its own scrollbars.

Next page: Delay of the land
Page: