If the Internet of Things scares you now: Cisco's CEO is bent on hooking up robots, everything

On Monday, in his first major speech as new CEO of Cisco, Chuck Robbins was clear about one thing. He pretty much wants everything on Earth to be networked and connected together.

But think about it: we're talking about more than just smartphones, smartlight-bulbs, and smartfridges connected to the web.

And Cisco isn't a startup in San Francisco pitching some sort of new way of hooking stuff together – it's number one in networking; it makes the kit IT departments order by the truckload. And Robbins wants its deep-pockets customers to buy kit to get just about everything connected, analyzed, and potentially accessible from anywhere.

At the company's headquarters in San Jose, California, staff from robotics maker Fanuc were wheeled out to the press to confirm they're going to use Cisco systems to hook up assembly line machines across the world. It is hoped that with masses of data coming back from sensors in the factories, software can analyze and identify robots that aren't performing properly, and give early warnings to repair technicians and manufacturers.

In another example, Robbins spoke of a person wandering around a store, pausing at a shelf of stuff, and having software and hardware in place to detect this and act on it – perhaps by sending them a message to persuade them to buy. 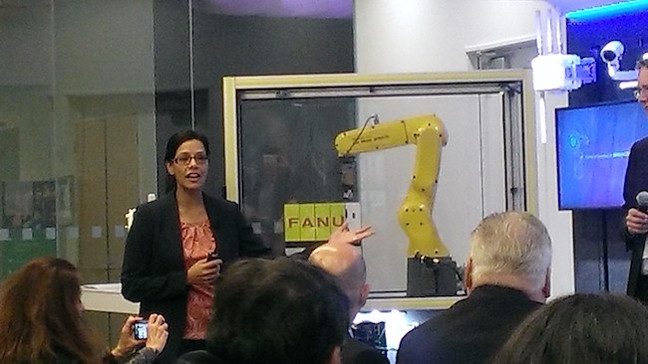 Fanuc, Fanuc, can you do the fandango? One of the connected machines demo'd at Cisco's Global Editors Conference on Monday

The networking giant also wants to provide "a connected, highly secure architecture that allows oil and gas companies more control over their pipelines, helping to protect assets from accidents or cyber-attacks." And "highly-secure power grids."

Are you worried? There have been so many horror stories published on security flaws in the Internet of Things – from home routers and kit being hopelessly insecure, to cars, more cars, and industrial and medical equipment left lying around on the web for miscreants to hijack.

Cisco has a trick up its sleeve to keep stuff secure, apparently: traffic analysis. By studying patterns of packets in real-time, anomalous activity – such as a rogue employee trying to sabotage equipment, or weird storage accesses – should in theory stick out and be trapped by the network. Robbins likened it to a bank freezing someone's credit card if it spotted unexpected, and likely unauthorized, transactions on the monthly bill.

Other companies offer similar machine-learning-based tech, which El Reg is keeping an eye on closely.

"True rich analytics are available in the infrastructure," said Robbins.

"One of the early-use cases of these analytics is in the security architecture. We can see threats coming in, which will help us solve one of the biggest challenges for customers.

"Allow the network to take advantage of machine-learning to build intelligence from its traffic, and act on threats if suspicious traffic is detected. There is no longer a central castle. We can’t put a moat around it. We have to do security differently."

Can traffic analysis truly protect organizations from hackers outside and disgruntled or incompetent staff within? What happens when the firmware in the underlying systems is compromised, as we just saw with SYNful Knock. We really do wonder.

Cisco's exec chairman John Chambers is convinced AI-powered analytics can do the job: "This is in real time as it happens – it has to be: five minutes later, and it could be too late. It's machines learning the behavior of other machines," he told The Reg after Robbins' presentation.

Other things raised on Monday by Robbins:

On innovation and startups, the new CEO said: "Our customers face issues they’ve always faced, all the normal things, but there's something else going on. Something else is happening. There’s this sense of paranoia that exists in every CEO. The slight paranoia that there's six people in a garage leveraging technology that's going to disrupt my business, and I don’t know who they are nor where they are."

On the cost of IT: "Our customers are moving to converged technology. They are fundamentally more concerned about operational costs than capita expenditure. So far, in our history, that’s not been the case."

On software-defined networking: "Everything we build will be programmable; everything in the data center is going to be converged. And we have to drive security to provide analytics of the network in motion, showing what's happening at a given moment in time."

On keeping up with competitors the pace of change in the technology world: "I'm going to be ruthless. I feel we have to move faster, faster, faster.

"If someone says they need 30 days to complete a project, I'll say they've got three weeks. They say 18 months, I say 9. I dunno why – it just feels good. We have to move faster, we have to simplify things, and be clear about what we're doing. It’s hard being simple in this complex world."

Robbins was made CEO of Cisco in May this year at the age of 49 as long-time boss John Chambers stepped aside to be executive chairman.

Robbins has been with the networking giant since 1997, admitted he was once upon a time an applications programmer, and was an unexpected choice for the Cisco corner office – he wasn't a frontrunner, but is (we're told) well-liked by staff and seen as a good pair of hands. Now he's putting those to use molding Cisco into the company he wants it to be. ®

Well, that and the 'contract losses'

Gulp! Irish Water outsources contact centres to Capita for up to €27m over 7 years

The most valuable commodity on the planet? Yep, outsourcing