Assange™ offered 'plans for escape by flying fox to Harrods' 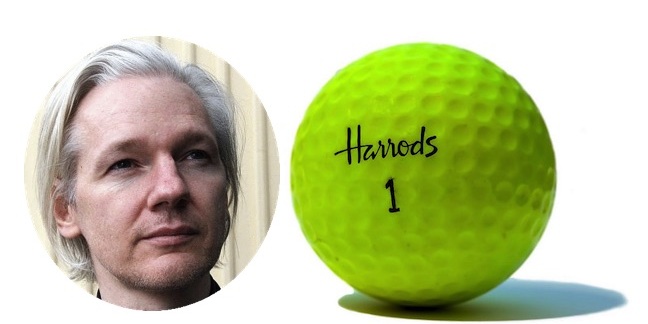 The interview, which kicks off at the 37:30 mark in this Soundcloud stream, was a reasonably lightweight affair as evinced by a question asking if Assange is on top of smartphone game leaderboards, seeing as he has so much time on his hands.

Assange's response was to say he never uses smartphones. “It is a serious situation here in relation to smartphones,” he said. “We assume all smartphones are infected, so they are banned from the building.” Feature phones are therefore the order of the day.

Pressed on which smartphones are the most secure, he said the fact that underground exploit markets are currently offering US$1 million for a working iPhone exploit, rather more than is on offer for rival platforms, shows Apple is going better at security than Android or BlackBerry.

The leaker-in-chief also offered some decent security advice, to the effect that it's dangerous to click on unknown links in email and that smartphone security is enhanced by staying out of the devices' web browsers lest they drop one into a pit of malware.

“It is getting so nasty, we argue here that we need a state that is free of mobiles,” he said, likening such a state to “a national park.”

Asked if he has a “Jason Bourne-style escape plan”, Assange says tales he has considered fleeing are the result of rumours that percolated up from the Ecuadorian press. He added that kids regularly write to him at the embassy, offering “well-drawn, detailed escape plans of me on a flying fox over to Harrods.”

“They show the look of the astounded police man as I zip past overhead.”

One extra-embassy excursion Assange and WikiLeaks did consider was playing football with the police guarding his unintended abode. Assange said that during last year's World Cup he contemplated kicking a ball out of the Embassy window to have a bit of fun with his guards. That idea was ruled out after examining the treaties governing embassies, as it was unclear whether police would be within their rights to grab his limbs if they crossed the threshold of windows, in order to drag him from the premises. Without certainty about extradition by defenestration, the plans for a footy friendly foundered.

Another nugget Assange dropped was that WikiLeaks tried to find documents on the fate of Malaysian Airlines flight MH370, which disappeared last year.

“We did look around,” he said. “I have a background in physics and I was intrigued with the doppler shifts” used to analyse pings sent out by the missing plane's satellite communications systems.

The interview otherwise stays in Assange's usual territory: everyone's out to get him, for unjust reasons, UK politicians are in thrall to the USA and WikiLeaks is good for the world.

His long stay in the embassy, he added, is good for WikiLeaks as aside from giving soft interviews to lightweight Australian radio shows he has little to do but work on the entity's efforts. ®