Microsoft, Tesla, build battery that knows how much (energy) you suck

Engineers from Microsoft, Tesla, and Columbia and Massachusetts universities have teamed up to develop what on paper looks like a revolution in consumer battery technology that meets demands for fast charge, long life, and the ability to bend.

The "Software-Defined Battery" system allows different batteries with different chemistries to be integrated into the same system. Fast charging and the ability to work for longer by adapting to different tasks are the result of the blended battery plan.

Energy consumption rates can even be predicted, based on learned user behaviour.

The team says these arrangements overcome current trade-offs in black-box batteries that mean no single type can meet all common user requirements, such as the need for a laptop to last over long-haul flights or to deliver quick bursts of power in applications like starter motors or camera flashes.

Delivering bendable batteries for use in wearables is also possible using the new heterogeneous system, according to the researchers.

They developed a prototype where bendy batteries are tucked into watch straps to supplement and provide "significantly improved" life to the main lithium ion battery.

In a paper titled Software Defined Batteries (PDF), the team writers that the system is part-hardware / part-software, the former offering granular control of power flowing through each battery thanks to "smart switching circuitry", and the latter is an element of the operating system that runs algorithms, policies, and APIs for increasing single charge-discharge duration and battery life.

"A growing range of battery chemistries are under development, each of which delivers a different set of benefits in terms of performance. We believe that combining multiple of these heterogeneous batteries instead of using a single battery chemistry can allow a mobile system to dynamically trade between their capabilities and thereby offer attractive tradeoffs.

In current designs, the interactions between the OS and Power Management Integrated Circuit are limited to query operations, such as inquiring about remaining charge in the battery, terminal voltage or the cycle count … Through the SDB system, we propose enabling fine grain control over the behavior of hardware sub modules by exposing a richer software API to the OS to dynamically change the amount of charge to be drawn from or provided to each batteryies."

The hardware is low-cost thanks to the brains being pushed into the software side. The grey matter works on non-trivial decisions such as how much power to pull from each battery, and how charging should work, all according to user habits. 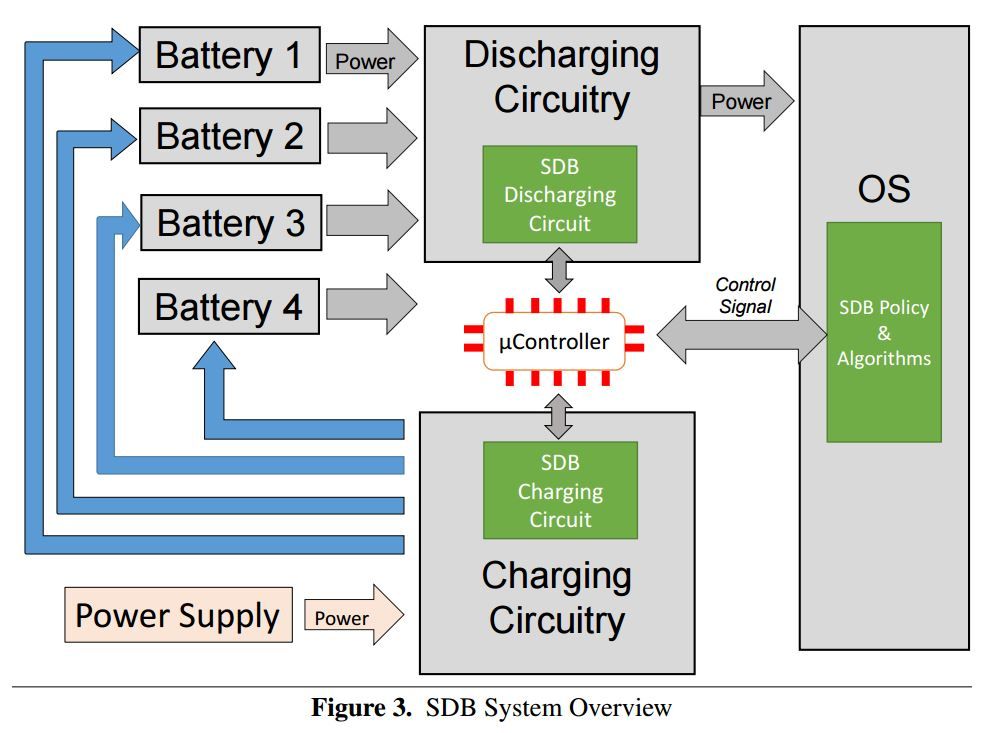 It adjusts performance for future workloads too.

"For example, if a high power workload is anticipated in the future, then it could be worthwhile conserving charge on the battery that is more capable of handling such a workload in an efficient manner," the researchers say.

The geeks are currently tying the system to digital personal assistants like Apple's Siri, Microsoft's Cortana and google's Now, as those programs already have an understanding of user behaviour.

"For example, if the user’s profile suggests that the user plays video games in the evening, then it could preserve a higher power density battery for that workload."

The technology is also being worked into use for such future tech as smart glasses, drones, and self-driving cars.

Users who rely on power slices, the supplementary batteries attached to the bottom of laptops to power the main supply, will gain a 22 per cent increase in energy capacity through the system's efficiency gains.

Engineers can satisfy their appetite for full technical details by pursuing the paper. ®