ICANN: Just give us the keys to the internet – or the web will disintegrate

Do what we say or the UN will take over, techies walk away, cats and dogs living together

Domain system overseer ICANN has embarked on a campaign of fear and fuzzy logic in its latest bid to seize control of the internet from the US government without agreeing to limits on its power.

The handover of the critical IANA functions from Uncle Sam to ICANN was due to happen last week, but has been set back a year to October 1, 2016 following procedural delays and extensive negotiations.

Now, ICANN warns, unless the internet community makes concessions on the controls that it wants to place on the organization's Board, the process could take even longer – and that could lead to the end of ICANN itself, as well as the United Nations taking over the internet.

On a conference call this week between ICANN Board members and the chairs of the committees drawing up the IANA transition plan, one slide caught people's attention. It was titled "5 Risks we face if the IANA Stewardship Transition is Delayed/Fails," and they were:

What's more, a second slide showed that unless the internet community finalizes its plans by December at the latest, the transition would in fact be delayed.

It was intended as a blunt message urging haste, but the first reactions to it by the skeptical internet community were largely mocking.

"Wow, that slide is a contentious parade of horribles if ever I saw one!" said one participant. Another noted: "I think the doomsday scenarios are just a bit exaggerated. We have to stop scaring people with the G77 boogeyman." Others chimed in with similar sentiments.

Such powers include the ability to fire individual Board members, veto the organization's budget, and force it to reconsider decisions if a majority felt the wrong decision had been made.

As you might expect, ICANN the corporation doesn't much like the changes and so has been fighting furiously to have them removed. Having failed to persuade the internet community that it didn't need such powers, last month the Board simply refused to accept the mechanism by which such powers would be enforced, namely the creation of a "member" of the organization, which would lend the community legal rights.

At an emergency meeting called to resolve their differences, the Board's chair Steve Crocker infuriated the community by refusing to accept the "single member" model – without providing a clear explanation as to why – and implied that he would rather stay under US government control than have the Board's absolute power constrained.

A week later, Crocker further antagonized the community by sending an email on behalf of the Board in which he also refused to accept even a watered-down alternative to that model.

"To be clear, the concerns that the Board raised on the Sole Member model still apply to a Designator model," he wrote. "The Designator model still introduces a new legal structure with powers that are intrinsically beyond the structure we have been using ... This is unproven territory and will require more detail and time to understand and test the impact on our bedrock multistakeholder balance."

Instead, he proposed that "the Board could commit to a future governance structure review triggered by key factors" – in other words, punt any actual change to some unspecified future date. 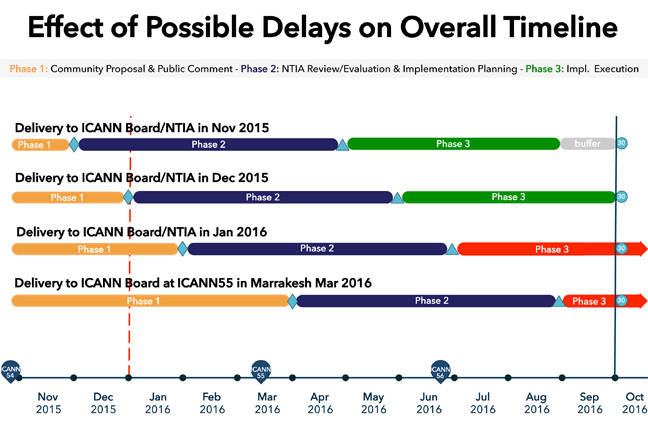 Quick! Quick! Dump your recommendations or you will run out of time!

Next page: 'Shock and disappointment in this Board response'
Page: