Who’s ready for an objective object lesson in object storage?

It’s changing how large storage infrastructures are implemented, so listen up

IBM is planning to acquire CleverSafe, HGST bought Amplidata a while ago, and RedHat did the same with Ceph 18 months ago. If you put this information alongside the fact that disk shipments are doing very well, even when compared with Flash, it’s no wonder object storage is so hot right now.

From my POV it’s a good move for IBM’s cloud strategy. It can leverage it to build a very scalable S3-like service as well as selling it as part of its hybrid/managed cloud deployments.

It’s one of the best products on the market and, even though it has a couple of limits which I have always considered a threat for its growth – Erasure code is not good for everything, and its architecture implies big installations from the first deployment – its maturity, good ecosystem of partners, and the fact that it has already proven (many times) the ability to scale well beyond 100PB, are major advantages for enterprise customers and xSPs like SoftLayer.

The need for scale-out storage

I’m not going to talk again about why we need object storage or, more in general, highly scalable object-based storage for unstructured data.

There is a video recording of the last TECHunplugged event which summarises it very nicely: 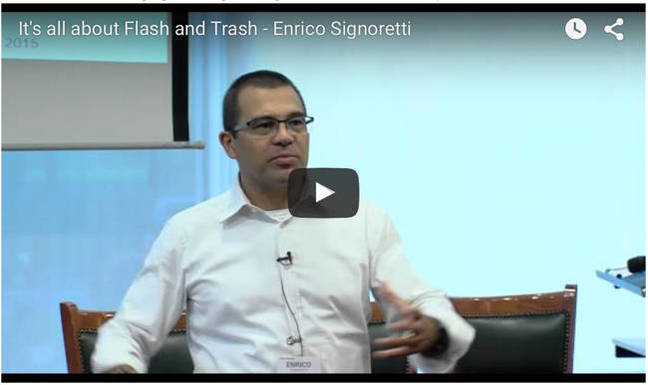 But, it’s a fact that enterprises are adopting it for various reasons and it’s changing how large storage infrastructures are implemented and consumed:

These are only examples, but they should give you an idea of why object storage is getting all this attentions from vendors and end users.

A look at the market

We now have Cleversafe going into IBM hands and, as I mentioned earlier, Ceph and Amplidata have already gone to RedHat and HGST. What about the rest of the market?

On the startup side:

Scality is really focused on its growth now (targeting an IPO for 2017). It’s one of the best, and very scalable, object storage solutions out there and it is doing pretty well with RING, its product, sold as scale-out NAS (counting for 40 per cent of its sales).

Caringo, with its 500+ customers, and the latest addition to its platform, is really interesting. The product is mature, and it can start very small (under 100TB of usable space) enabling mid-size customers to adopt OBS.

Cloudian is another startup with cool ideas. Its 100 per cent compatible S3 API, the new (cool) hardware, analytics and a couple of other nice features (such as tiering to the cloud) make it really interesting in the enterprise space.

SwiftStack: I got to talk to Joe Arnold (founder of the company) a few days ago for my podcast. I have to say that I was skeptical about the product but the soon-to-be-released 3.0 version looks much more on par with its competitors now – on paper at least.

The primary vendors are doing well

HDS: I’ve always loved it for the ecosytem it's built around the object storage platform. It’s the only end-to-end solution available at the moment that includes Sync&share and remote NAS appliances from a single vendor.

And it is also adding many features that I find really compelling for enterprise customers. The potential development with HSP (Hyper Scale-out Platform) is intriguing.

NetApp: It seemed that StorageGRID was lost in the fog. But all the new releases and the roadmap show quite the contrary. New, recently acquired products such as AltaVault and a broader set of features are making this product competitive in a wider set of use cases.

DDN: I put DDN with the established vendors because it can’t be considered a startup any longer (more than $300m in revenues last year) but it still has the agility of a small company. WOS360 doesn’t have the visibility it deserves. It’s a good product and it has been deployed in infrastructures that see a growth of more than one billion per week.

Its high performance design doesn’t fit in smaller infrastructures, but integration with the rest of DDN products make WOS an interesting solution for customers with high performance needs at scale.

HGST: As well as Seagate, this company is building a strong offering, and object storage, thanks to Amplidata, is an important part of it. It is investing and working on interesting things for the future.

EMC: With EMC it’s hard. It has too many competing products. I personally love Isilon (even though it’s not a proper object storage system). Atmos?, ECS? What else? All the rest seems half-baked stuff; old design, not very scalable and without a clear strategy. Am I wrong?

Next page: ... And the newcomers
Page: