Japanese electronics firm Sharp has presented a prototype smartphone which is also a functioning tiny robot.

The robomobo is 19cm tall and weighs in at 390g (compare with the iPhone 6 at 129g). Dubbed RoBoHoN, it will be commercially available during the first half of 2016, according to Tuesday's CEATEC preview event.

A nosey tincandroid, the device comes equipped with a facial and voice recognition system, as well as a camera, a projector and a small LCD display on its back.

Questioned about RoBoHoN's practicality, the CEO of RoboGarage, which collaborated with Sharp on the prototype, acknowledged that it was mostly a fun gadget. 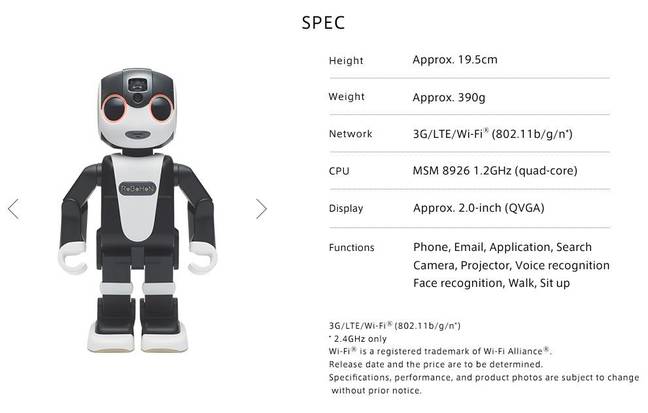 Capable of walking and dancing, the device has been branded as a "Heart moving phone", just like the initial Cyberdyne Systems's Terminator models. (Is this right? - Ed)

RoBoHon will also upload its interactions with users to the cloud, where data will be crunched to help the robot learn, claimed Sharp.

The electronics firm said it had not yet decided upon the sales channel for the robomobo. ®