It's looking a bit grey up above...

Our greatest worry was the weather. The day was amazing but the forecast ominous. On television pretty French weather girls pointed at ugly French weather clouds sweeping across maps of the country from the Atlantic. Lots of rain added to the Atom’s barely legal semi-slick tyres would add plenty of expletives to the description of the drive home.

So the plan was to make headway half a day early and have two overnights on the way back instead of one. 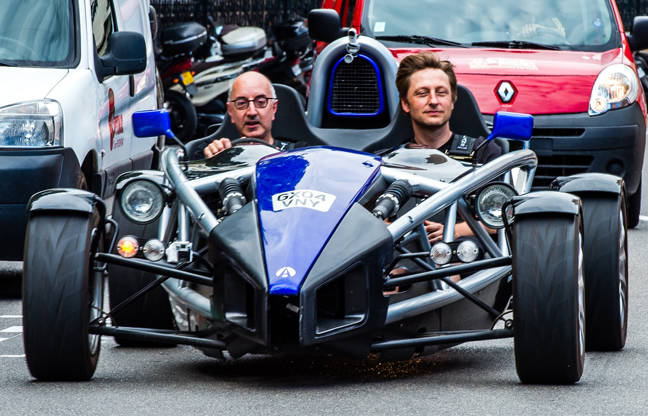 But you know what they say about plans. As we left Monaco we stopped for petrol, and filling up the Atom there was a trickle of fuel onto the concrete. Something was leaking, and that something was very close to some parts of the engine which glowed. There was also something up with the electrics: brake and indicator lights were not working as they should.

So the plan became a quick pit-stop back at the house, having shopped at the source of the world’s best olive bread in Cap d'Ail, on the way back. We gave the car a once-over before heading to Grasse for an overnight stop.

At least, that was the idea, but when Craig looked at the fuel leakage problem he found that it was down to the pipe between the filler nozzle and the tank. Brothers Paul and Craig got out the Allen keys and screwdrivers to get at the pipe. This meant removing the engine covers but here the naked nature of the Atom scores, the body panels being removable with simple clips.

Over the years the rubber fuel pipe had perished and cracked. It wasn’t a simple hole; the whole pipe was rotten. When it was compressed it might hold liquid but it needed some major bodging. That came in the form of Craig very neatly wrapping a spiral tourniquet of duct tape around the pipe, which did the job of holding the pipe tightly enough to stop the fuel leaking into the tape and so dissolving the glue.

Gaffer tape is like The Force: it has a light side and a dark side and it holds the universe together. We used The Force to protect our car. And we hoped that, since the pipe didn’t have to hold fuel but only convey it from the filler to the tank, we’d be okay. The wrapped pipe was, however, thicker and less flexible than when it was manufactured so Craig and Paul had to apply a different kind of force, brute force, to get it in place before securing the jubilee clips and screwing the filler back in place. 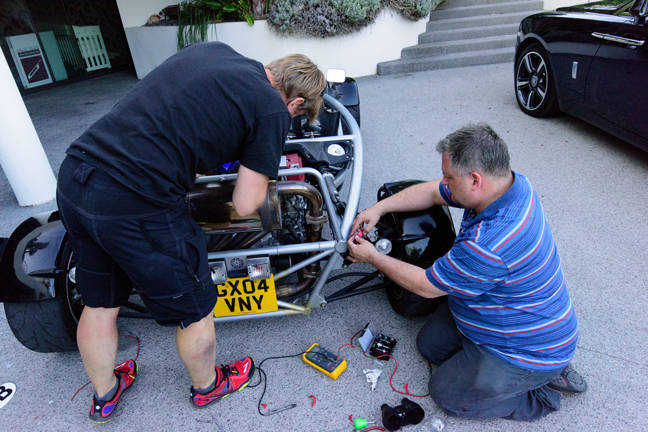 That was a minor issue compared with the electrics. Tracing which lights worked – headlights, slidelights, indicators and brake lights – and which would only work in conjunction with others, was a matter of different switches and permutations. With a multi-meter and an incredibly impressive array of spares and tools which he’d put in the boot of the Rolls-Royce before leaving the UK “just in case”, Paul diagnosed three problems after climbing under the car to reach different parts of the electrics: wiring loom shorts, blown fuses and one he called “I don’t know what causes that.”

Paul and Craig rebuilt a section of the wiring loom. The spares included suitable lengths of cable which they neatly bound into a backbone for distribution and which, with the help of several torches and much profanity, they fed through the innards of the car, securing it in place with cable ties. They replaced fuses which promptly blew; cue more profanities and reaching inside with the meter. More puzzling was why the meter read 5v, rather than 12v or nothing.

Ultimately they got to something they deemed both “good enough” and “legal”, or at least legal if we didn’t drive it in the dark. They even hazarded that it might qualify as “safe”, although why one indicator was flashing fast remained a mystery.

By this point it was far too late to hit the road and a friend staying at the house, Elliot, cooked some rather excellent chicken. We looked at the beautiful sunset and tried not to think about the forecast before retiring.

Next page: Home, safe and dry. One out of three ain't bad
Page: