Home, safe and dry. One out of three ain't bad

What were we worrying about? The Mediterranean morning dawned bright and clear. Even Guy could see it. The cars looked great even if we did eye the Atom with suspicion, knowing what electrical gremlins lay beneath.

The route along the south coast from St. Jean Cap Ferrat to Nice and Antibes has a history as the playground of the sun-seeking British. There is a reason why it’s called the Promenade des Anglais. It was beautiful but hardly featured great driving roads.

We stopped for breakfast in Grasse, a city famed for making perfumes, with a cobbled square and wonderful atmosphere. It’s the start of the Route Napoléon, named after the conquering Corsican and following his course from 1815 on his return from Elba. More prosaically, it’s the N85, D1085, D4085, and D6085 highways.

Unsurprisingly the Atom doesn’t have a built-in satnav, but the Wraith does, so that led the way with Craig at the wheel. Before the journey we’d thought the Rolls-Royce would make a great platform for photographing the Atom, not the other way around. We were wrong; the Atom made a superb chase car and we ended up with far too many shots of the Wraith’s rear haunches.

With the Rolls-Royce leading the way and Craig at the wheel, we enjoyed the twisty narrow roads, the Atom in its element. Had it been ahead, nothing else, not even a sports bike, could have kept up with it. Through one of the small villages a hen party screamed with delight of the Rolls-Royce but then they saw the Atom, and the Flying Lady’s moment faded. 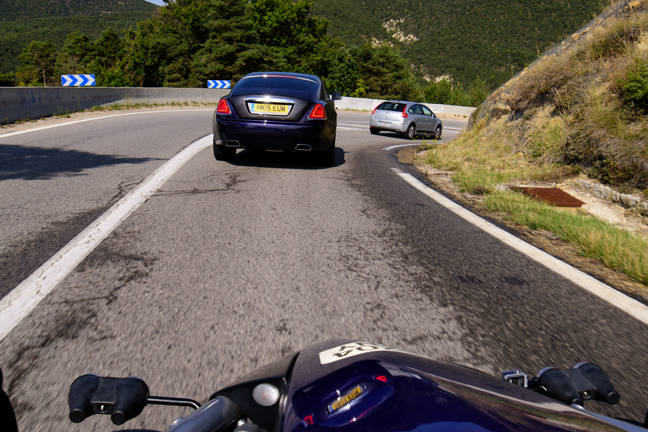 The incredible grip of the semi-slick tyres on the Atom meant that at no point was it left behind by the hugely more powerful Rolls-Royce.

Then we hit a diversion. A closed road meant much narrower, albeit still beautiful, roads. The Atom has a dreadful steering lock, and some hairpins needed two bites to get around. No-one was brave enough to try and slide it, but we did get some chirps out of the Wraith’s tyres.

As much fun as it was, we were losing time. We wanted to get as far north as possible while it was still light to reduce the driving the following day, so we decided that once we hit Grenoble, four hours north of Antibes, and six hours into the day’s driving, we’d take autoroutes (motorways).

Initially, driving on an autoroute in the two fun cars was great fun. When they have been straining on the leash the whole way, the ability to give them their head gave us an adrenaline rush... but the weather had other ideas.

Driving an Atom in the rain is like being peppered with BB gun pellets. Helmets and gloves become mandatory. But the rain gets everywhere. Waterproof trousers mostly are, but a pocket in my jacket wasn’t: the rain killed my Lumia 930.

The rush of wind also moves the Atom's wing mirrors. Positioning the passenger-side mirror is as much art as science, and not something you can really do on the move. Ultimately, you have very little vision of what’s happening on your left hand side. 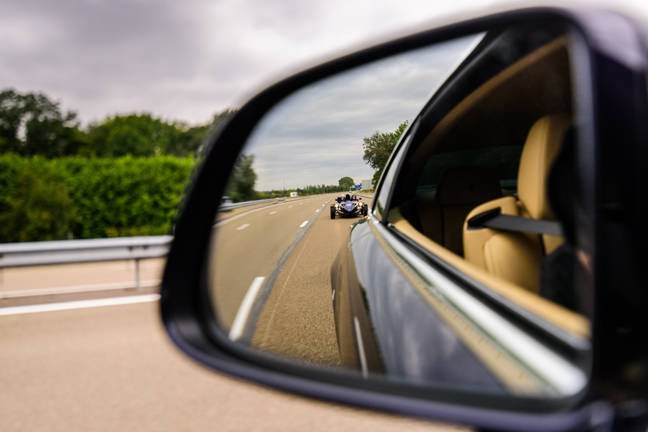 Despite the noise, wind and the rain, the seats and the position in the Atom is extremely comfortable. A couple of us had a quick snooze as passengers. While most cars these days have adjustments for wheel height, and plenty have controls for reach, all you get in the Atom is limited seat movement. Yet, when you are driving, all the controls fall neatly into place.

The handbrake is a bit different. It’s on the right of the driver and is best reached Chitty Chitty Bang Bang style by dropping your hand outside the car and then reaching in.

The atmosphere in the Rolls-Royce was one of concern for those in the Atom. The water rooster-tailing from the Atom’s tyres gave some confidence that at least there was some traction from the semi-slicks, but sitting in climate-controlled comfort, listening to podcasts of The Infinite Monkey Cage and Gareth Jones on Speed is a lot less visceral than being exposed to 80km/h rain.

We had communications in the form of a couple of prototype DMR walkie talkies from Sepura. They had been specially set up to transmit at 0.5w and were fixed to a frequency, to be legal in France. The best feature was that the spate mike contained a speaker so the Atom passenger could wedge it into his helmet and hear the people in the Rolls-Royce. This meant his communication with the other car was better than with the driver sitting next to him, which, with the combination of wind, engine noise, helmets and rain, was limited to hand signals. Adding ear-bud headphones made the reception even better.

It was with relief that the Atom drivers watched the Rolls-Royce pull into a service station for fuel and a driver change. Those in the Wraith were overcome with concern for the exposed two. 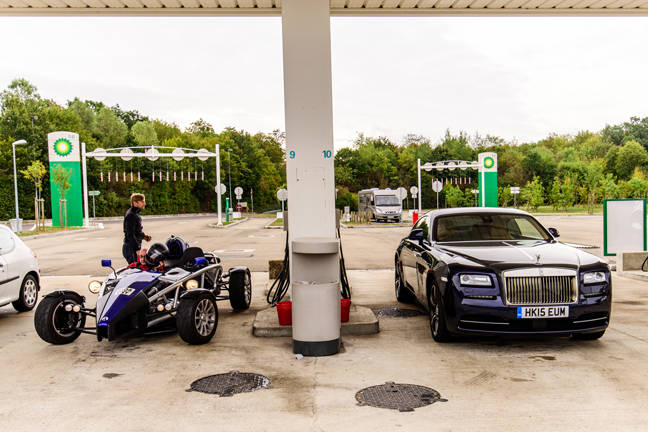 We swapped drivers, Guy and Paul climbing into the Atom with our target being the town of Troyes, nearly three hours north of us. As it was all autoroute it was decided that the Atom should go first and dictate the pace. It also meant that the Rolls-Royce could act as a tail-gunner and cover the rear of the Atom, which disappeared in the spray. And there was a lot of spray; the heavens opened. France has had some really heavy storms this year – this is the wettest September on record – and we were up close and personal with one of them.

By the time we were approaching Dijon the light was fading, along with our hope of making better time. Still, Dijon is a city and we shouldn't have had any problems finding a hotel with secure parking. This was not the case.

Next page: Mustard from the home of mustard, monsieur?
Page: