We’d got wet before but that was nothing compared to the downpour which met us as we crossed northern France. Imagine a dozen people with the kind of high pressure hoses they use at car washes firing at you. Within minutes I’d got to the level of wet where there is no wetter to get. Drenched to the underclothes with my visor steamed up – and very pleased to be the passenger, with Guy driving.

No adventure is complete without the fear of death and that came when the lights went out. Pulling into the left hand lane was scary enough without a mirror on that side but not being able to signal the intent added a certain frisson. We could have slowed down but then we’d have missed the train. So on we went in the rain. I might not have been able to get any wetter but there was the cooling effect of the wind. And I was certain that the standing water was going to have us off into the barrier.

At one point I was hoping that Guy would drive a little closer to the barrier so that when the time came and we spun I’d have fewer final seconds to freeze in time and contemplate before meeting my Armco fate.

I later found that not only was Guy’s (much better vented) helmet not misted up, he found the car to be well planted and not aquaplaning at all. We arrived at the tunnel just in time, to find that there had been an “incident” and our train was delayed a couple of hours.

This was good because it gave us a chance to get into the terminal and change into dry clothes – which had been stored in the Rolls-Royce – but it was also bad because it meant that we’d be getting home as the sun dropped. And the car now had no lights. We changed the fuses and they worked, so we resolved not to use the lights until the very last moment.

If driving the Rolls-Royce onto the “high vehicles” part of the train felt a little fraudulent, doing so in the Atom, which was neither high nor wide, was doubly so. But the marshals waved us through when we indicated that we were together.

Whenever you’ve been somewhere exciting, the roads near home feel both reassuring and tame. That’s not the case in a car with no lights and not being able to see out of the left hand mirror. London’s North Circular felt like a video game with no re-spawn option. As the natural light faded I played chicken until about fifteen minutes from our destination and then tried the lights. They didn’t work. We later diagnosed that it was the reversing light which was causing them to blow, so changing the fuse in the car park was fine, as long as we didn’t then reverse out of the space. 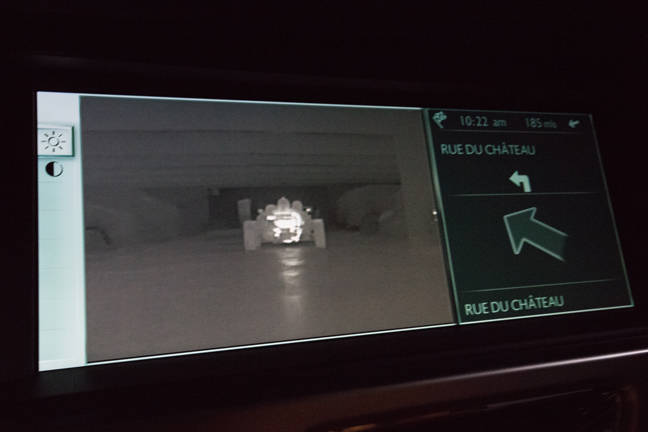 We reached our destination, the London home of the Atom’s owner, just as it got too dark for it to be considered safe. Driving back home in the Rolls-Royce Wraith, we contemplated the luxuries it had. Little LEDs which look like stars for interior lights, infra-red night vision(seen above showing the Atom) and, best of all, a windscreen. ®

Please Enable JavaScript to use this feature.
Page: