Hurrah! Doctor Who brings us a bootstrap paradox treat in Before the Flood

Twisting time to flush out beasties

Let’s deal with the timey-wimey bit first. The bootstrap paradox or “who wrote Beethoven’s Fifth?” question is a good one. Towards the end of David Tennant’s tenure and during the Matt Smith years, the awesome opportunities of time travel were sidelined.

A bit about “fixed points in time” that everyone accepted for the sake of the plot ... apart from those of us shouting “you’ve got a bloody TIME MACHINE” at the screen. With any luck this season we’ll see more mind-bending plots that really use the TARDIS.

The Doctor observes that O’Donnell seems to know an awful lot about him, which given he’s done a stint as President of Earth is hardly surprising.

All those trips to London and Cardiff and no one noticing his interference was getting a little far-fetched, and recognising the Doctor has a sort of alien celebrity allows the characters to act out the audience’s feelings. Who wouldn’t jump up and down and squeal: “it’s bigger on the inside!”?

Less exciting is the new reliance on Earthly tech.

Clara’s smartphone looks on course to get billing of its own this season, but a short lesson on phones and Faraday cages is useful for the under-tens. The time paradox as it is raised again is a trickier conundrum for parents to unravel on a Saturday night. But this is Doctor Who as it should be; getting kids interested in questions of science in between hiding from monsters behind the sofa.

The big monster of this episode takes his time being revealed and despite impressive costuming, is a little underwhelming, preferring like Davros in previous episodes to attempt to talk the Doctor to death. Ho hum. 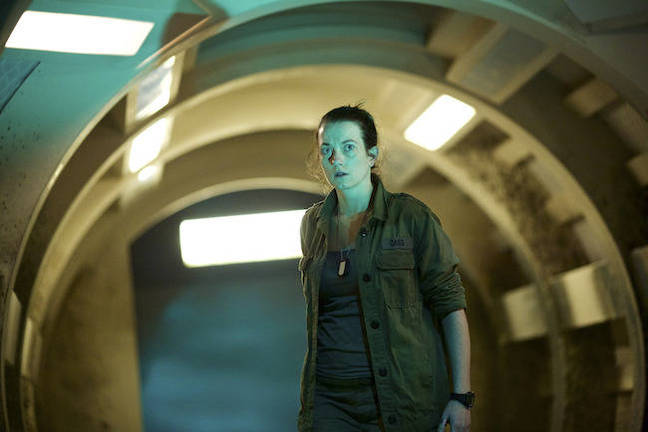 Doctor Who, Season 9 – Before the Flood. Pic credit: BBC

The ghost hologram is a touch predictable and the emotional fallout of short-term companion humans is something viewers have come to expect, making Before the Flood the sort of episode that in parts is just going through the motions.

Closing the episode with reference to the opening lesson is neat, even if the Doctor’s claim that he's “reverse engineering the narrative” sounds like a clever way for getting out of plot holes in stories. But it’s done with such charm and swagger, that surely no one really minds ... unlike the sonic sunglasses! Are we going to have to deal with such travesty Every. Single. Week?!