Sysadmin blog Cisco's new CEO Chuck Robbins has caused a lot of introspection with me. This week he said a number of things that frighten and confuse me.

Let's start with the quote. This thing ricocheted around Twitter, caused a minor stir in the article comments, and was generally responsible for nerdly mirth and merriment for the length of a coffee break:

"If someone says they need 30 days to complete a project, I'll say they've got three weeks. They say 18 months, I say nine. I dunno why – it just feels good. We have to move faster, we have to simplify things, and be clear about what we're doing. It's hard being simple in this complex world," Robbins added to journos at Cisco's Global Editors Conference in San Jose, California, on Monday.

Trying to give this quote some context, let's combine it with another winner: "Our customers face issues they've always faced, all the normal things, but there's something else going on. Something else is happening. There's this sense of paranoia that exists in every CEO. The slight paranoia that there's six people in a garage leveraging technology that's going to disrupt my business, and I don't know who they are nor where they are."

This makes my initial read on Robbins – CEO of one of the most powerful and well-resourced companies filled with a goodly percentage of the best and brightest minds on the planet – that he envisions himself as Jeff Goldblum being chased by a T-Rex through Jurassic Park.

I'll leave it up to the reader to decide if a persecution complex is something that's ideal for a mega-corporate CEO. I could probably argue that either way, but I'm never getting that image out of my head. Even with the context of Robbins' startup persecution syndrome, however, the "feels" quote bugs me.

As kids on the internet would say: OMG, the feels

The one thing that really bothers me is this: "I dunno why – it just feels good." I am not comfortable with someone who has as much power as Robbins crashing around the world governed only by feelings. It is here that my introspection begins, and we meander well away from tech (and sniping at mega-corporate chief execs) on a journey of self-discovery.

Stick with me, I promise you I'll get back to the tech angle.

The idea of leading by feeling makes me uneasy. It always has, but it wasn't until a discussion with my wife (triggered by the Robbins quote) that I figured out why. Short version: politics.

Cutting four hours of conversation down to just the conclusions, I realized that political movements that really bother me are extremist and emotive.

In the US, for example, the Radical Right (usually hand-waved away as "the Tea Party") gets under my skin quite easily. They are the extremist right wing, powered by emotion and only resorting to evidence or logic as a means of justifying positions they feel are right. Emotion is the impetus and driver of behavior and everything else exists to justify, validate, promote, and enforce the emotion. 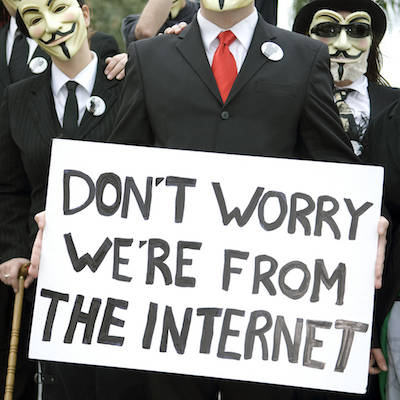 We all have something to protest about ... Photo by Anonymous9000

On the other side of the spectrum are the emotional extremists of the left wing – Not In My Backyarders (NIMBYs) and Social Justice Warriors (SJWs) – who react to emotional boogymen with the same level of irrationality and desperate need for validation as the most frothing of Tea Party flag wavers.

It's the extremism that gets me. The fervor. The unwillingness to compromise or even to allow dissenting opinions to be aired. Pick a topic, and my reaction to extremist points of view is always the same: revulsion.

Copyright? I can't stand copyright maximalists, but nor can I stand die-hard freetards. This is a complex topic that affects the lives of billions of people and needs to be discussed in a careful, considered manner by people who don't have skin in the game. All viewpoints must be considered and some hard compromises must be reached for the benefit of everyone.

Economics? Both unrestricted free market capitalism and outright communism have failed gloriously for the exact same reason: they failed to allow for the full range of human behavior.

Capitalism relies on people being rational actors: doing what is best for themselves, even when that is subsuming short-term desires to long-term thinking. People aren't rational actors.

Communism relies on people subsuming personal desires to the will of the collective and trusting that the collective will in turn take care of them. Ultimately, the goal of communism was to ingrain this philosophy so fundamentally that a centralized government wouldn't even be required. No country ever even came close.

We can carry on and on and have this same discussion about anything in tech. Operating systems. The DevOps movement. Even the use of Cisco routers versus the competition. Encountering and dealing with extremists or those who push a product, service, or ideal with religious devotion is the mindspider that defeats me every time.

After years of viewing myself as "a mix of social democrat, but with a strong belief in fiscal accountability, government minimalism, and balanced budgets," I realized that I too am an extremist. My easy description is as a member of the "radical center." I believe in evidence-based legislation and the supremacy of the scientific method.

Sometimes you can't be six sigma certain of things before making decisions, but my feelings are that those in power over us should damned well try.

Which brings us back to Robbins and his "I dunno why – it just feels good" quote.

Next page: There is a tech angle, here, we swear
Page:
Corrections Send us news
33 Comments

San Francisco approves 'CEO tax', hopes to extract up to $140m a year from corps with wide exec-staff salary gap

Plus or minus a load of caveats

Big Blue may have an in on new healthcare plans

TikTok CEO quits after less than three months in the job

We'll get you later: SAP CEO promises help for customers in 'financial distress'