Its "magic keyboard" has been due a refresh and literally last week, your humble hack's keyboard stopped working.

It's hard to tell what precisely has gone wrong, but it is definitely something to do with the connection from the two AA batteries that the keyboard used to power itself. The keyboard just shut itself down after a few seconds.

While on the way to the Apple Store in the hope that this was a common and easily solved problem, the company announces it has brought out a new version of the keyboard (and its trackpad and mouse) and has already solved the problem by removing the batteries altogether in favor of a rechargeable one.

And so, $99 later, here is a quick and simple review of the latest keyboard: typed on the new board itself.

First up: the good.

The AA batteries are gone. That means it is less bulky. And it means you won't need that bumper pack of batteries to keep the thing going. Instead it has a rechargeable battery built in. You charge it with a Lightning connector same as your iPhone.

It also has a physical on/off switch. The old keyboard had a round button on the side and it was never clear whether you had turned it on or off. Or if it turned itself off. And it tended to turn itself on. End result: low battery life. Plus, if you left your keyboard in your bag, it would occasionally do crazy things to your computer as its buttons were inadvertently pressed.

The layout of the keyboard is basically the same, although the new keyboard is not as high because it doesn't have the bulky cylindrical batteries propping it up. There's less of an incline than the old keyboard; it's simply flatter against your desk. 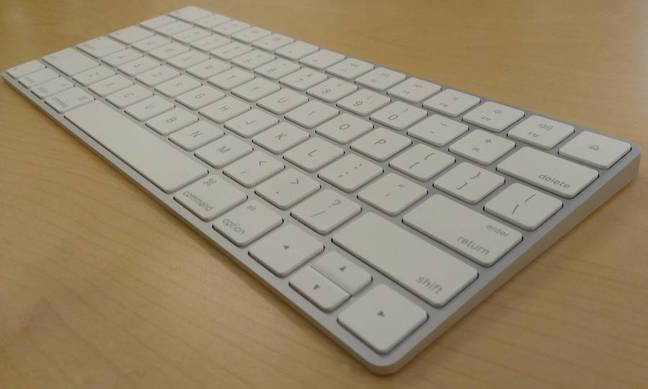 So far my wrists are not happy: a slight ache has already begun. But that happens whenever you get a new keyboard, your hands have to get used to it.

Also, for some reason, the keyboard feels smaller. It isn't – it's the exact same size – but it may be that your outer fingers now touch the desk when not being used, where they were raised slightly above the desk before. The end result after 30 minutes of typing is that you rest your wrists more on the desk. And that means pushing the keyboard further forward on the desk to make room. It could end up being more comfortable.

Taken together, the new keyboard requires a small adjustment in how you lay out your desk.

Next page: Connecting the thing up
Page: