Windows 10 only is not a universal solution

Microsoft introduced the Universal Windows Platform (UWP) this year: applications that run across many device types, provided that they all run Windows 10.

Unfortunately, that proviso means that the UWP is far from universal, targeting only a small minority of Windows PCs out there, and leaving other operating systems untouched. In a world where Macs are commonplace, and mobile is owned by iOS and Android, UWP apps are more niche than universal. If Microsoft succeeds in migrating most users to Windows 10 over the next couple of years, that will improve matters, but only on the PC.

“The goal is to enable *one* .NET Client Application Project to build deliverables for the following platforms,” states the request on the Visual Studio 2015 feedback site, and goes on to list Windows 10, Legacy Windows, Unix, Linux, Android, iOS, Mac and HTML5.

The problem Visual Studio developers face is that they want to continue coding in .NET languages like C#, and to use the powerful XAML language to build a user interface, but their customers demand support for platforms other than Windows, especially iOS, Android and Mac.

The Microsoft of today is already making every effort to promote cross-platform development (as long as it is not Java). Visual Studio 2015 comes with cross-platform technologies to the point of confusion, including third-party Xamarin tools for compiling C# for non-Windows platforms, Apache Cordova for wrapping HTML and JavaScript as native applications, and Visual C++ compilers for Android and iOS.

The Xamarin tools come closest to what developers are demanding. Xamarin targets iOS, Android and Mac, and Xamarin Forms is an implementation of XAML that enables a cross-platform user interface. There are several snags though. This is a third-party implementation of .NET, based on the open source Mono framework, and therefore not perfectly aligned with Microsoft’s .NET Framework. It is also expensive, with businesses paying at least $999 per developer per platform for a one-year subscription. Third, the XAML in Xamarin Forms is not compatible with any of Microsoft’s existing implementations, and does not target desktop Windows or Mac, only iOS, Android or Windows Store applications.

Another existing piece which has cross-platform promise is .NET Core, a fork of the .NET Framework which runs on Windows, Mac OSX and Linux. Currently, .NET Core only targets server-side applications using ASP.NET, or the UWP, but in principle it could be extended to client applications. That said, with Visual Studio 2015 pointing developers firmly in Xamarin’s direction for cross-platform clients, it is hard to see Microsoft investing in its own alternative. 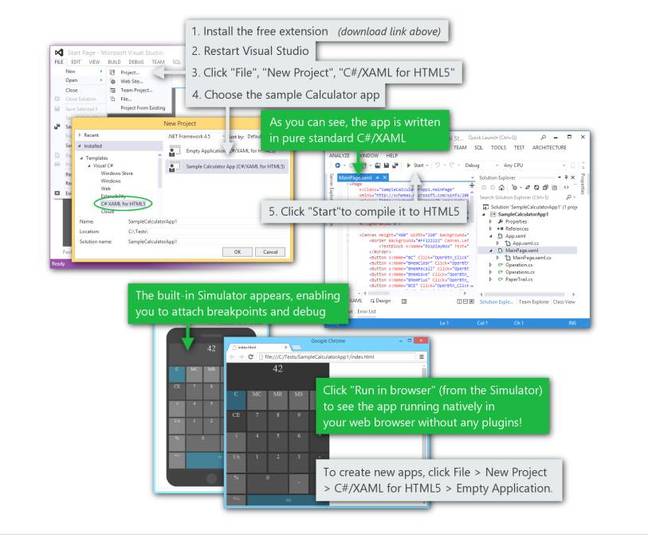 Extending .NET to HTML5 clients may seem a stretch, yet there is already a Userware project called CSHTML5 in preview which claims to implement 99% of C#, 70% of XAML and 40% of .NET Core by compiling to HTML and JavaScript. In conjunction with Apache Cordova, something like this can also work as a mobile solution.

The C# language has been a big success for Microsoft, and is now one of its key assets in attracting or keeping developers coding for its platform. C# cannot thrive forever as a Windows-only technology though, and these cross-platform options are now critical to its future. ®