IBM has a new high-end array, the DS8880, sporting a faster processing complex which can double sequential data access speed1 over the previous (DS8870) generation through new Power8 controllers.

The DS8000 arrays are at the absolute top end of the monolithic storage array tree, and are on the same general level as EMC’s VMAX and HDS’ VSP arrays.

Also, HP would say, its StoreServ 20800 duo are on par with it, as well as InfiniDat’s Infinibox.

There are three models:

The array can scale up from 3TB to just over 3PB2 and has a high-performance flash enclosure (HPFE) module, with 400GB “ultra-fast flash cards” for the highest data access speeds. We’re told storage pool striping and flash drives can virtually eliminate disk “hot spots.” 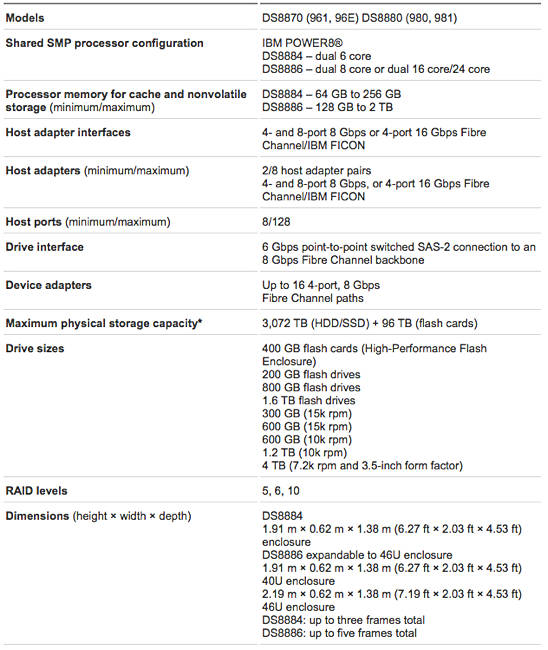 IBM says an EasyTier Application feature has an API developers can use to have their app tell EasyTier where to place data.

We’re told there is a 30 per cent reduction in footprint on a new 19-inch rack. Old racks are measured at 33 inches, which makes them roughly 30 per cent smaller. Big Blue boasts that, for every rack eliminated, customers can save $1,000 per year in operational costs.

All DS8880 components are redundant and can be upgraded with no downtime, increasing its availability. The array also features remote mirroring “that can be integrated with a high availability server capability to provide the highest levels of availability.”

Infinidat’s Infinibox boasts seven nines availability, meaning less than three seconds' downtime in a year. The DS8888 should beat that.

Downtime is claimed to be 31.5 seconds a year, six nines. A DS8000 with HyperSwap provides hot swap between primary and secondary Metro Mirror to be managed concurrently with normal array operations. If a DS8880 array goes down, a server sets up an immediate connection to a mirrored DS8880 to continue operations. If there is a disaster or planned outage operations can continue with six nines availability. DS8880 availability can be even higher if a multi-site recovery system is deployed. 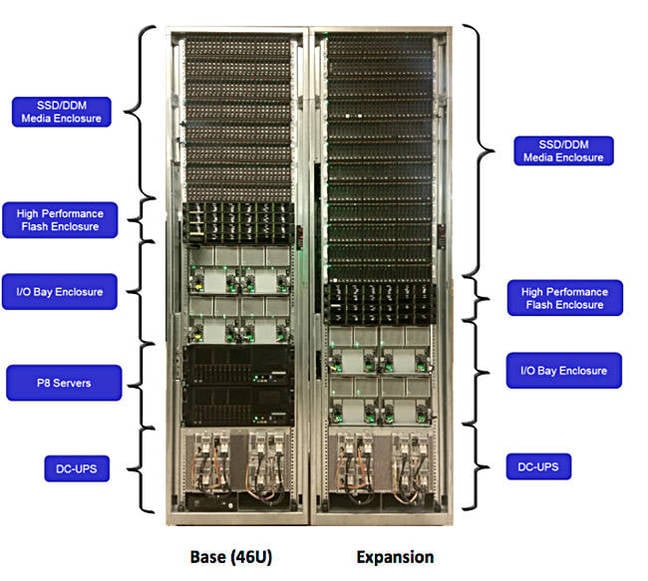 We imagine the all-flash DS8888 will be a world-class heavyweight champ performer, when it comes, and probably use a bunch of the HPFE modules full of PCIe flash cards. Perhaps it will use SSDs as well, with a 2-tier design.