Antique Code Show It was 1986, and the world went bonkers for Top Gun: that film about pleasant young chaps learning the flight ropes of F-14 Tomcats. New-wave synth poppers Berlin sang Take My Breath Away while straddling decommissioned aircraft; Tom Cruise apparently began a longstanding attempt to disguise his diminutive stature; and discussions abounded over the film's allegedly homoerotic sub-plot.

In 1987, rather than shell out on a hefty Top Gun licensing fee, Sega enterprises cashed in on the hysteria with their own F-14 Tomcat shooter, After Burner. Eschewing the option of realistic simulation, Yu Susuki’s arcade shooter took up where Space Harrier and Out Run left off, with thrills, kills and barrel rolls aplenty.

The game zipped through 18 stages, with a frantic pace to keep pilots on their toes (or more likely pumping additional silver into the coin box). Your F-14 came equipped with a standard-issue "vulcan gun" and limited supply of heat-seeking missiles, operated by separate switches on the joystick. 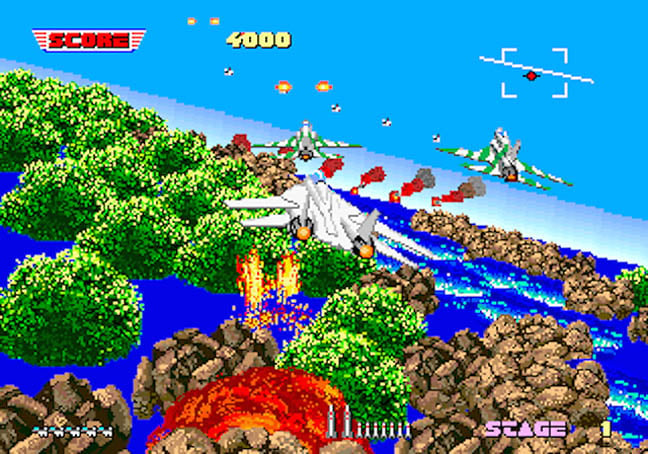 Arcade action gets a bit hectic

Enemies gained lock-on squares that deviously followed them around, showing you which ones would get it should you deploy a missile. Every few levels would see a happy mid-flight refuel and weapons refresh occur, for pilots who were ploughing their way through to a decent high score.

The need for speed

After Burner debuted an updated version of Sega’s most advanced arcade hardware: the X Board. Featuring Sega’s custom “super-scaler” graphics chipset running at 50MHz, the hardware rotation and scaling abilities of the board were quite sensational: up to 256 sprites in each frame, thousands of sprites scaled within a second, and all output at 60 frames per second.

With hindsight, it’s tough trying to remember quite how impressive the pseudo-3D visuals were, but the sense of inertia and speed created by the graphics still creates an impressive illusion. For 1987 eyes, it was like peering into a glorious gaming future.

Having said that, it wasn’t just screen-based delights that gave After Burner its long-running arcade-room success – the physicality of the machines was an essential part of the experience.

For the budget-conscious arcade owner, the lower-end stand-up cabinet gave players a decent level of immersion. A realistic force-feedback joystick lent authenticity to proceedings; pulling down on the stick made your aircraft move upwards, and vice-versa, of course. A massive screen accompanied lights that signalled when an enemy had locked you on target, with high-quality speakers blasting out the rock-themed tunes directly at ear-level.

Portuguese-speaking retro-gamers, your time is now

Mr. Hedgehog, this is your life

Sega Mega Drive to be revived next month