And still there was more. It was the deluxe cabinet where the arcade "experience" was being truly innovated, with Sega’s AM2 department keen to outdo themselves with their most ambitious project yet.

The entire arcade unit could rotate along its horizontal axis – aided by a strong motor and rubberised wheel – simulating change in aircraft pitch. Similarly, roll movement was achieved with the cockpit shifting smoothly within the outer cabinet shell.

All highly effective – not to mention original – design ideas, which heightened the sense of motion experienced by players greatly. In addition, dual speakers were incorporated at head level, cementing the full immersion experience with After Burner’s rock anthems. Take a grand tour of the cabinet in the clip above.

Within its first year of release, Sega began issuing After Burner 2 instead of the original title – indeed, it was the only version to make it to Europe. Not strictly a sequel, the title did make some significant revisions – most probably Sega acting on feedback from its arcade user base. 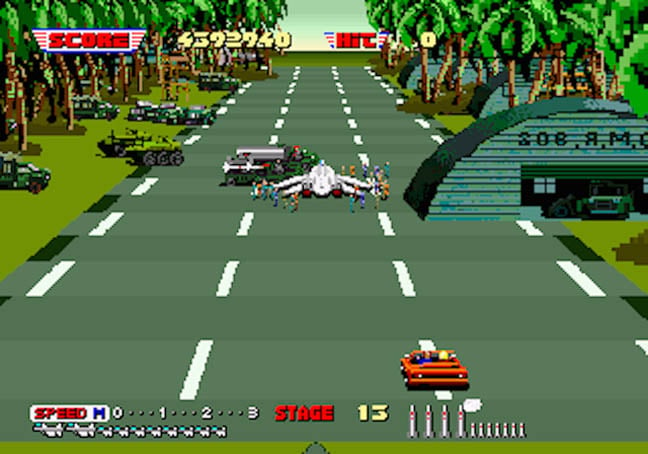 After Burner 2 gets a new cut scene

A throttle control was introduced, operated by a dedicated handle in both upright and deluxe cabinets. This extra variable allowed the player to escape enemy missiles that were tracking your flight path, employing those namesake after burners no less. 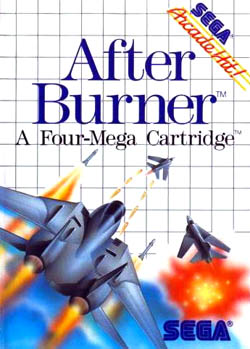 The Master System version's HUGE capacity... but why?

Stages were added, with others revised, and new refuelling graphics appeared: a smooth-landing F-14 would be met by trucks and mechanics to replenish supplies.

The Out Run Ferrari or Hang On motorbike would sometimes zoom past in a neat little Sega in-house game reference. All looks a bit crap now, but back then it was seriously cool (no, really).

Home conversions had the unenviable task of recreating something of this most ridiculously powerful sprite-manipulator along with its mould-breaking cabinets.

The 8-Bit Sega Master System received a reasonable release, proclaiming its 4-Megabit (512kB) credentials loudly – though quite why the extra cartridge space was needed remains a bit of a mystery. Activision’s speccy version looked – predictably – absolutely nothing like arcade After Burner, but still managed to be a half-fun blaster.